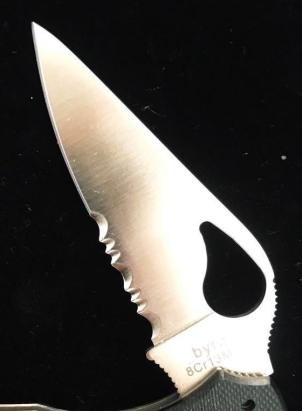 This week I was in my local park with my youth football club. One of the kids found something left next to a tree and called me over.

He had found a weapon. It was a jagged knife blade which had been bound with gaffer tape to a foot-long handle.

It had been well made. The handle had velcro around the base to provide better grip and the tape was carefully and very neatly placed to keep the blade secure.

I spend a lot of time in this park and I walk through it every day. This was a genuinely shocking moment. It is not because we are unaware of knife crime. But reflecting on it, it was these two factors that got to me:

Firstly, there was the thought that had gone into constructing it.  Someone had sat down and put time and significant effort into making something as horrible and destructive as this.

Secondly, it was an awareness of the carnage it could cause.  The handle adds so much leverage to the blade, it did not bear thinking about what it would do to someone who was hit with it.

I called the Police on 101 and they said they would send an officer to pick it up. I was told not to pick it up but there was no way that I was going to just leave it there.  I knew the Police would take some time and the last thing I wanted was someone to come back and get it, so I moved it and stuck the blade in the ground to make it safe.

The young people in the football team are mainly 13 and 14 years old. It was good to use the situation to talk to them about all this. It made us all think – who had left it there? And why? The blade was clean so perhaps it had never been used – perhaps the owner of it came to his senses and dumped it?

It is ironic that this all happened just yards away from Norbury Police Station which recently closed and is now being turned into flats. This came only shortly after Streatham Police Station also closed a mile further up the road.

Two hours later, once the football had ended, the Police called me back and I met an officer who collected it.  Even she was shocked when she saw it.

I hesitate to write this as it could contribute to increasing fear of crime already sensationalised in the media.  Its important to say that in over 5 years of organising football in the park every week, I have not experienced one shred of trouble.

But this experience made me think about the young people caught up in this violent culture.  Creating and carrying such a weapon means that just one single movement could change lives forever – scarring, wounding, killing…tragedy, imprisonment. Many lives never to be the same again.

It’s a knife-edge that far too many people are walking.

Of course, some of the answer is about increased resources for policing and funding for youth services But for me, the violence we see in our communities re-affirms the importance of family life and voluntary youth work.

Our culture has a shocking disregard for the importance of stable families. The value of family has been sacrificed on the altar of personal choice which trumps everything. But the gap created by absent fathers is a massive, massive issue in my local community. It links directly back to why kids join gangs and then why weapons like this are created and used.

Secondly, we need far more adults involved in the lives of local young people. My local parks are often completely empty, apart from people walking their dogs.  Now as never before we need people to mentor youth people, to get involved in sports and youth groups, for churches to engage and connect with the young people around them.  A football club like the one I run is very simple, inclusive and needs no funding. It could easily be replicated.

Every week we see more examples of the cost that is paid by our collective negligence.  This is a life and death issue – and the time to act is now.

2 thoughts on “Lives on a knife-edge”