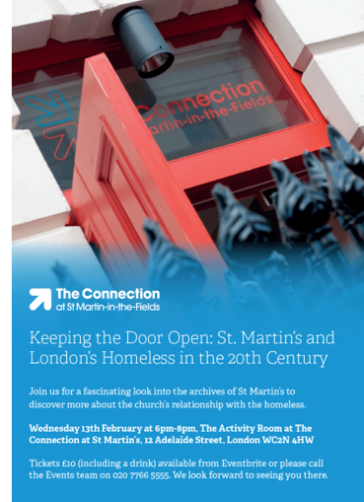 Almost all homeless charities in the UK have their roots in the Church.

Some are obvious, such as The Salvation Army, West London Mission, Cardinal Hume Centre, Providence Row, Emmaus, The Church Army and many others.

Less people are aware that organisations like Shelter, the YMCA and Centrepoint were also established by church leaders and Christian activists.

Although not faith-based, St Mungo’s, was given this name because the founding activists thought ‘a Christian saint’s name would stop police hassling workers on soup runs’ because they would ‘think they were reverends’!

But faith is not just a historic factor – something which only relevant in a bygone age.

In the last 15 years, it has been churches that have been the key provider of new forms of emergency accommodation for homeless people, especially through the Winter Night Shelters.  And it is people of faith who make up the majority of those who organise soup runs and direct support to people on the street.

And, as the ground breaking report Lost & Found made clear, issues of faith and spirituality are important to homeless people themselves.

It is important to reiterate this historic and contemporary reality.  The contribution is easily overlooked because many smaller groups and churches do not have communications professionals and marketing budgets like the larger charities. Also, because faith is controversial and can make people nervous, it is easily air-brushed from the stories that modern charities tell about themselves.

St Martins-in-the-Fields, Trafalgar Square, is probably the best known church in the UK for its work with homeless people.  It has been helping homeless people since the First World War and since establishing The Connection at St Martins (CSTM) is now one of London’s largest homelessness charities.  Each year it helps 4000 people who are sleeping rough sleepers or vulnerably housed.

My good friend Pam Orchard is the Chief Executive of CSTM and the Vicar is Rev Dr Sam Wells, a leading theologian who writes extensively about the role of faith in social change.

St Martin’s has a fascinating history which they have been looking into with the help of Peter Wood. Peter has a PhD in social history as well as a lot of experience of working with homeless people, and is writing a book about 100 years of homelessness in central London.

In February, they are hosting an event all about the history of St Martin’s work with homeless people:

I would really encourage people to come. I think it will be a fascinating evening, especially for anyone interested in how the church has responded to poverty and homelessness and what we can learn from the past.

More information and to book a place.