I grew up in a large C of E church in South Croydon.  Looking back it was a church which gave me a lot of great things – most of which I did not appreciate at the time. Every year the church sent a number of volunteers to help with Scripture Union’s annual Holiday Club at St Jude’s and St Paul’s Church in Islington, London.  My older brother had got involved before me and he used to come home with stories from a world that seemed a long way from the relative calm of our suburban upbringing.  Part of the Holiday Club focussed on a council estate called the Marquess on the Essex Road– and my brother’s stories about it conveyed a pretty bleak and terrifying place.  One year he and some other leaders got beaten up outside the Marquess youth centre and I will always remember him coming home and pulling out of his bag a ripped up, blood-stained jumper.  Those things tend to stay in the mind.

So in the summer of 1991, aged 19 I too signed up for a week on the frontline. It turned out to be one of the most important things I have ever been involved in.  I was thrown in a world very different to what I was used to – and looking back it was my first real experience of mission.  I remember the book of Acts coming alive to me more than it had ever done because for the first time ever, I was intentionally serving Jesus beyond my comfort zone.  I remember at the end of the week-long club feeling more knackered than I had ever done – but also a deep sense of learning and comradeship with those I had served alongside and a growing love for the urban community we joined.

I did the club for 3 summers and enjoyed it hugely. Then, partly due to a new job I had but also due to a wobble in my faith, I took a break.  A few years on my wobble had deepened into pretty much giving up on being a Christian.  But in the summer of 1996 for some reason I felt compelled to go back to the Holiday Club again –I think more out of a desire to do ‘urban youth work’ than ‘mission’.  Again though it was brilliant experience. At the end of that week the small Baptist Church on the Marquess estate made me an offer that changed my life. 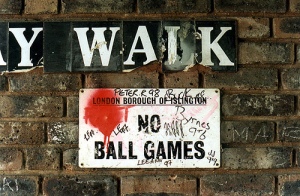 The church had bought a old wine bar on the estate that had closed down and had converted it to use as their church – the Marquess Christian Centre. The building came with two flats above it – that were previously used by the manager and the bar staff.  They had moved their youth worker into the manager’s flat and asked me if I would move into the other flat.  It was like God throwing a gauntlet down to me – which way are you going to go?  At the time I was living with 2 mates in a nice house in South London, life was good and we were having a laugh. But I knew God was on my case and I knew I had to accept the challenge.  I said yes to the offer and moved into my new world.

Moving onto the Marquess at the age of 23 changed my life because it gave me experiences that I would never have had unless I lived there.  They have stayed with me ever since, etched onto my consciousness.  At the time I was working at a large and very hectic homeless hostel in Hackney at the time but the difference between working for people affected by poverty and living alongside people is massive.  Nothing taught me more about the challenges facing the urban poor than living on that estate for 2 ½ years.  In the end I had to move because the council decided to demolish most of the estate, including the church.  I moved down the road to Kings Cross but I remain forever grateful to both the church (and its leader Nigel Williams) and the Scripture Union Holiday Club for the experience they gave me.

I know that short term mission is no panacea to the challenges of estates and the urban church. I saw the Holiday Club a bit differently when I lived there 52 weeks a year and saw all these enthusiastic volunteers pile in for just one week a year.  I also know that I gained far more from the whole experience than I contributed.

But Scripture Union’s Holiday Club and its partnership with the local church gave me an experience that I will never forget.  It has affected my choices about where I live and what I do for work ever since.  When I was a young Christian that week-long Holiday Club helped me follow Jesus into some of the tougher places where his love is most needed – and it helped set me on a path where I am committed to following him for the rest of my life.

1 thought on “How an urban holiday club changed my life”