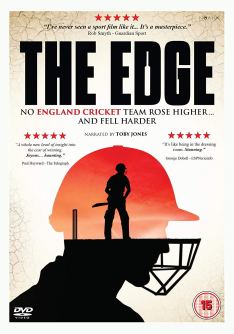 This week it was World Mental Health Day. I was struck by the number of men I know posting on social media about their struggles with their mental well-being. Even just a few years ago, I doubt people would have been so open.

And this weekend, I watched the film The Edge which is a documentary all about the England cricket team’s rise and fall between 2009 and 2013.

Before I lose the non-cricket fans, this is not really a film about cricket.

The key subject is the vulnerability that top sports people face and how they cope with the relentless pressure of elite sport. Watch the trailer here:

In 2009, the England cricket team was languishing down near the bottom of the international rankings when Andy Flower took over as coach. The film reveals his methods in building team spirit and increasing the intensity and focus. Results-wise, it paid off. Within 2 years, England were the No.1 Test team in the world and had won the T20 World Cup.

But this success came at a price. Flower was a hard task-master and could be brutal.  Many of the players are still open about how scared they were of him.

The Edge is beautifully and creatively shot. I particularly enjoyed the behind the scenes footage, seeing team talks and dressing room celebrations and the frank interviews with characters like Pietersen, Alistair Cook and Andrew Strauss.  Wicket-keeper Matt Prior puts it bluntly:

‘Life as a professional sportsman doesn’t necessarily lend itself to you being a good person – because it’s all about winning.’

The Edge vividly reveals the intensity of international sport and the pressure this puts on individuals and their relationships. There were a number of casualties of this period. As they explain on camera, both the bowling and the mental well-being of Stephen Finn and Monty Panesar suffered under the pressure.

The highest profile example was Jonathan Trott who suffered a dramatic break down in Australia in 2013 and never successfully returned to Test cricket.  Seeing him in tears as he talks about how much he misses batting with his former team mates brings home the central theme of the film more strikingly than anything.

Men need to talk and share openly about their mental health. Seeing those who are heroes due to their ability speaking honestly about their vulnerability is powerful and refreshing.

The Edge is highly recommended – and not just for cricket fans.

The Edge is available on Amazon Prime

Jon Kuhrt has worked with people affected by homelessness and poverty for 25 years. He is a former CEO of WLM and is now a government adviser focusing on how faith and community groups address rough sleeping. He lives with his wife and three children in Streatham, south London. He likes football...but loves cricket. View all posts by Jon Kuhrt

2 thoughts on “Ability, vulnerability and mental health: ‘The Edge’ [review]”