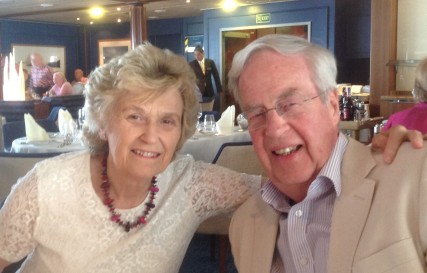 I have reached the stage in life where I seem to be going to an awful lot of funerals. Many close friends of my husband Gordon and I have died in recent years.

Some have seemed to be in good health until suddenly they are not around anymore. Some, like Gordon’s brother, have died after struggling with failing health for many years.

There is nothing like the passing of close friends, to make you think of your own mortality.

But one thing that most of these funeral services have had in common is the sense of celebration. Instead of sombre clothes, we’ve been encouraged to wear bright colours. Instead of a morbid atmosphere, the readings, hymns and tributes have expressed a joyful sense of Christian hope.

I love my life and especially spending time with dear friends and our family. But I want to share with younger people, especially my grandchildren, why Christians can face the prospect of death with hope.

I want to draw on what the Apostle Paul writes in his second letter to Timothy.  This is the last letter that Paul wrote and he is imprisoned in some dark dungeon in Rome: chained up, cold, lonely and deserted by friends.  Worst of all, he was facing the prospect of execution. He knows his life is coming to an end.

His assistant Timothy was young and could be timid and shy. We know he was prone to stomach upsets and this is why Paul tells him to drink wine instead of water (this verse always appeals to me!)

Paul urges him not to be afraid of responsibility. He wants him to guard the truth of the Gospel, be determined to proclaim it and be prepared to suffer for it.  Paul uses three statements to sum up his journey (2 Timothy 4:7):

‘I have fought the good fight’

Earlier in this letter Paul had written to Timothy, ‘endure hardship as a good soldier of Jesus Christ.’  It was a metaphor that Paul had often used in his letters. It served as a stark reminder that the Christian life is a struggle against evil – within ourselves and in the world. We are not fighting in a military campaign but there is a spiritual battle to be fought.

Paul had never flagged in his commitment and zeal in standing up to wrong and in proclaiming the good news of Jesus. His allegiance to fight the good fight for Jesus, his King, never wavered.

‘I have finished the race’

Running a marathon needs endurance.  Over the long run the competitor will grow weary but they must not lose heart.

In his life, Paul need endurance. He travelled in uncomfortable circumstances, he preached to many unresponsive people, suffered rejection, beatings, imprisonment and shipwrecks.

He must have grown weary but he never lost heart. His aim was to keep pressing on toward the goal. Even now, when he knows that the race is nearly finished, he wants to maintain perseverance to the end.

‘I have kept the faith’

When we have something special that we treasure, we guard it, so that it is not lost or damaged. Paul felt like that about the Gospel.

Christ had entrusted the Gospel to him. Although people undermined his integrity, made slanderous attacks on him and attacked him physically, he ‘kept the faith’. He treasured and trusted in Christ’s promises.

Paul was anxious that this faith should not die with him. And we should be too. My generation need to pray, as we hand on the baton to the younger generation, that they will stand firm and not just be led astray by the culture around them.

It is so easy to ignore the subject of death and dying.  Our culture shies away from it and pushes any thoughts of it from the mind. It is not an easy subject to talk about.

Young people may well think it is something a long way off.   However, as people grow older and their health and mobility declines, it dawns on them that death is not very far off. Some people even reach the point when they feel ‘it is time to go’.

Whether we are young or old, the Bible is clear that death is not the end of the human journey. A strong Christian faith makes all the difference because it gives us hope.

The hope of life beyond the grave, with God, and in the company of loved ones, is enormously sustaining and reassuring. Paul had that hope and that’s why he remained faithful to the end.

I don’t know how many years and months that I have left. Whether its few or many, I want to be able to end my days by saying with Paul

‘I have fought the good fight, I have run the race, I have kept the faith’.

Based on a talk given by Olive Kuhrt (aged 78) at St Mary’s Church, Haddenham

2 thoughts on “Finishing the race – by Olive Kuhrt”