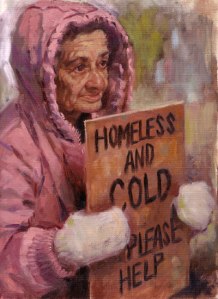 I have worked for a variety of homeless charities for over 20 years, so generally not much surprises me when it comes to the reality of poverty and destitution.

However, this week I was out doing a street count in London to assess how many people are actually sleeping on the streets. It’s been a while since I did outreach work like this and it made me reflect on what I saw.  I was particularly struck by three things:

I was out deep into the night and at around 2.00 am, it struck me again how dangerous and frightening life on the streets actually is. In the eerie silence of a city stilled, my ears became acutely aware of every noise. Every person wandering around was a cause of suspicion: Why are they there? What are they up to? Where are they going?

It struck me how damaging the impact of such a suspicious and insecure environment is on homeless people. Especially when they end up on the streets for an extended period.

Everyone of the people we met appeared to be hurting. These are fragile and broken people despite any tough exterior they might portray. Often they end up doing things to survive they might hate themselves for if they could ever allow themselves to reflect.

These invisible people in our society are often mocked and abused by drunken passers-by. Their pain and hurt increased by those who get their kicks from treating others as less than human.

These first two points might be obvious to many, but my third point is perhaps more controversial.

We had people from the local church as some of the organisers of the street count. From many of the Facebook posts I read, cheap shots at organised religion are increasingly common. If asked, I would describe myself as an agnostic on a spiritual journey. I am not a Christian and do not attend church services (although I sometimes pop in during quite times for some spiritual solace).

Yet I became increasingly appreciative during the cold night of these individuals, motivated by their faith, who give up their time to befriend society’s most excluded people. If it wasn’t for church groups many more homeless people – and especially migrants who do not qualify for benefits – would die of hypothermia each winter.

The State had withdrawn any support for those individuals (even if they have been tax payers).  Therefore the “professional” homelessness agencies, generally funded by Housing Benefit, have been put it in an impossible position where they can’t help migrants for whom work or re-connections back home are not viable options. In some more remote areas church outreach and shelters are the only provision that exist.

The evening made me think about the contrast between these activists and the snide commentators who deride their work whilst sitting in pubs preparing their gimmicky protests against capitalism. I don’t see anarchist groups banding together to go out and actually help people. They are more likely to be writing long tomes on Facebook railing against injustice. I even hear them talking pompously about how “piecemeal actions” such as night shelters and food banks are pointless in the face of deeper injustices.

I remember some  years ago going to a comedy benefit gig for asylum seekers where a household name left-wing comedian used the occasion to mock Christians in the audience. This is despite Christians being amongst the only people to be practically helping and publicly speaking out in defence of asylum seekers at the time. This seemed as unnecessarily hurtful to me as if he had made jokes on the basis of sexuality or race.

As I was reminded on the streets this week, in the current housing and poverty crisis, the work of churches and other faith groups is vital. Those sitting on the sidelines should quit patronising and sniping at them and respect them for what they do.

Paul Anderson lives in London and works for a homeless charity

5 thoughts on “I’m agnostic, but I know if it wasn’t for Christians many more homeless people would die on the streets – by Paul Anderson”