Over the last few years the website Christian Today has grown in prominence in the UK. It carries a wide range of religious news and commentary and high profile Christian leaders, like Krish Kandiah and Youthscape’s Martin Saunders, regularly write on the site. Ruth Mawhinney, a former Editor, is now Head of Media for Justin Welby, the Archbishop of Canterbury.

But there is a major problem with Christian Today.

And these are the adverts which litter its webpages. These adverts promote get-rich-quick schemes, crash-diet pills and dubious debt-solutions. It means that whatever good content the pages contain, they are all massively undermined by the unethical and corrupt advertising which surrounds them.

These are a selection of typical adverts which appear on Christian Today pages: 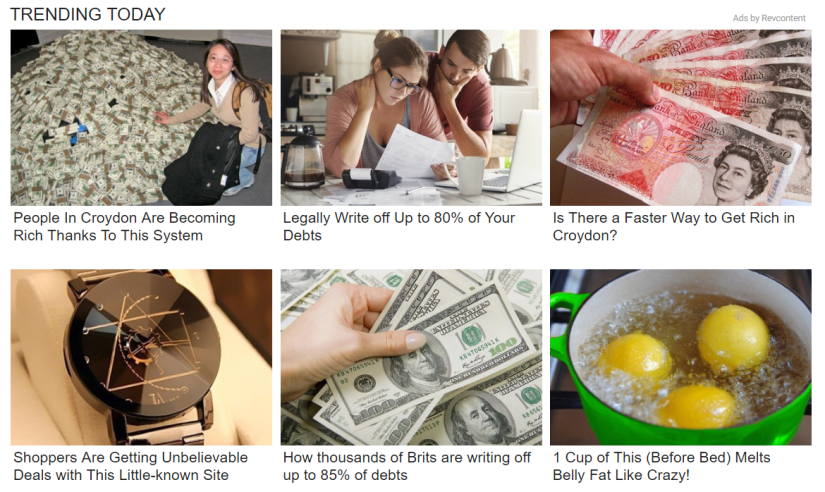 I clicked through on the one titled ‘Is there a Faster Way to Get Rich in Croydon?’ It took me to a site about Tesler Investments run by ‘CEO Stephen Abrahams’ In a video, Abrahams promises that anyone can make $5700 a day using his ‘special investment techniques’.

He repeatedly emphasises that he can make a ‘life-changing amount of money’ for anyone and appeals specifically to people who are struggling with debt worries. He states baldly:

“I love money and I love everything that comes with it”

Abrahams explains how he is worth $384 million but he has given half of his money to charity and good causes. And, perhaps with an eye on the Christian market, one of the video ‘testimonies’ is from someone claiming to be a missionary in Somalia who is aiming to use the funds he has made to build a hospital.

But the truth is that Stephen Abrahams is not worth millions of dollars. In fact he is not real, he is just an actor. And there is no such company as Tesler Investments.

Its just a scam. Tesler Investments entices naive people into handing over $250 with the promise of making huge amounts.  The web is full of reviews which expose them.

I work with people affected by debt and I know how vulnerable people are when they are desperately seeking solutions for their money worries. But these adverts exist because they work – the scammers and the platforms they advertise on, make a lot of money from ripping people off.

Frankly, it makes me sick to see this being promoted on a Christian website.

The business behind Christian Today is the Christian Media Corporation (CMC) based in the US. The CMC Group promotes itself as ‘the global Christian news leader’ and says:

“As the largest, premium all-digital media platform for the and religious audiences…Our primary investment objective is to amplify our growth to accomplish our mission with rapidity and scale.”

Quick growth is obviously vital to CMC. Even, it seems, by helping to rip off their Christian readers.

I believe that Christians should communicate well and share their message effectively – but never at the expense of our integrity.

Being faithful is more important than accomplishing things ‘with rapidity and scale’.  After all, what good does it profit a website to gain all the readers in the world, yet forfeit its very soul? (as Jesus may well have said).

CMC’s Statement of Faith is telling and illustrates the ethical weakness of US Evangelical theology. It is jammed full of propositional, doctrinal statements, referring to Jesus’ virgin birth, miracles, atoning death and resurrection.

But it says nothing about God’s concern for justice or the kingdom of God.

It is a world away from the Jesus’ recorded in the gospels – with his burning concern for righteousness, justice and standing up against the abuse of power, money and religion.

It is a shallow theology which sits comfortably with powerful business interests.

There is a massive dissonance between much of the good content of Christian Today and these appalling adverts. I am sure that many of the staff and contributors would agree with me.  It will be the bosses at CMC who will need persuading.

So I have written to Mr William C. Anderson, the CEO of CMC Group, to ask him to change CMC’s advertising policy. I’ll keep you updated as to what he says.

6 thoughts on “The Only Way Is Ethics: ‘Christian Today’ has to drop dodgy adverts”