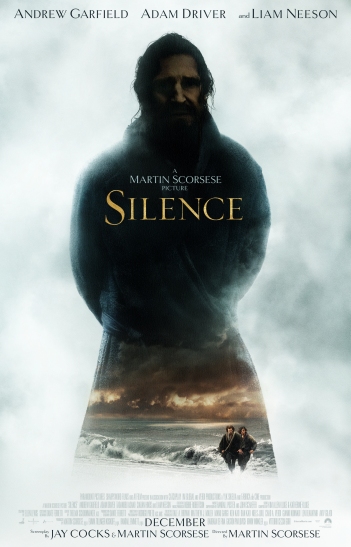 Going to see many films produced by Christians is a bit similar to a visit to McDonald’s. You hope that no-one sees you going in and as you indulge yourself, you try to convince yourself that the delivery of such a sugary hit must contain at least some nutrients.

Many films marketed to the faith community seem designed to offer a platitudinous pat on the back for believing, rather than providing true sustenance for the journey.

We know not to expect any such easy offerings from Martin Scorsese. Nonetheless, this film did premier at the Vatican. So, is Silence a film which seeks to court favour with the established church – perhaps even providing a justification for proselytism?

Of course, it’s not that simple. Instead of providing a comfort blanket of faith entertainment, Silence chooses to press into the most difficult areas, the knotted muscle as it were, of faith and unbelief.

It refuses to provide any resolutions and in doing so, offers rich gifts for those willing to engage with its challenges.

Adapted from the 1966 novel by Shusaku Endo and thirty years in the making, Silence focuses on the journey of two 17th century Portuguese priests, Garrpe and Rodrigues, who return to Japan having received the news that their mentor Ferreira has renounced his faith.

At this stage, we have already witnessed a distraught Ferreira viewing scenes of unbearable horror, as Japanese ‘Kirishtians’ are martyred before him. The two priests embark on their mission to seek out Ferreira, bringing them into contact with communities of persecuted believers.

The priests are initially greeted with fervour and relief by the communities. Yet as the story unfolds, we see each faced with impossible choices designed by the inquisitors to break their spirit. Each scenario offers the promise of relief of others’ suffering following the renunciation of faith.

These scenes could be read as a dark counter to the imperialism the priests represent. In daring to believe they could colonise the ‘swamp’ of Japan their faith is fed back to them by Japanese feudal powers as a choice between upholding belief or relieving human misery.

In turn, the question of theodicy arises: where is God in this? Did he design it?

Rodrigues asks ‘How can I explain His silence to these people?’ The priest’s own journey becomes central and invites us to reflect on our own faith and how we respond to such challenges to our deepest beliefs.

Weeks after seeing the film, I find myself considering the nature of faith, and the dynamic between our own internal journey and the external mechanisms we have to support what we believe. I was also drawn back to two specific themes I’ve unpacked below.

Awareness of our own lenses

Firstly, whilst the issue of how the Church is intertwined with imperialism is only implicit in the film, it presents the need for a continued awareness of our own lenses.  How do Christians bear witness to the truth and model this in our own lives?  How do we remember the primary need for our own conversion?

Would the priests have reached the same conclusion, and destiny, if they perceived themselves as firstly those primarily in need of conversion? Indeed, was their whole mission in the film a journey of self-discovery? What if they came looking for signs of the kingdom they would seek to nurture first? The foot we lead with becomes crucial.

Secondly, when faith seems to be reduced to a series of death-dealing choices, how do we maintain the wider perspective of the kingdom? Is there a deeper invitation, still?

Historically, many of the saints speak of suffering as invitation to encounter more expansive love. I was reminded of St. Francis’ own journey who realised that for love to be real, it had to include pain:

‘It was easy to love God in all that was beautiful; the lessons of deeper knowledge, though, instructed me to embrace God in all things.’

So in conclusion, if you are feeling robust, please go and see this magnificent and challenging film. Go with those of faith and with those who don’t believe. Go with some time on your hands to allow it to press into your own personal knotted muscle wherever you find it to be.

Oh, and, if you decide you deserve a burger afterwards, I would be the last to judge you.

Silence is released in UK cinemas on January 1st 2017.

Corin Pilling works for Livability, leading a team of people who help churches build community across the UK, and enjoys the occasional dirty burger.