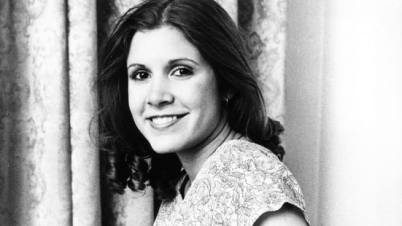 Carrie Fisher was more than a princess. At the age of 24 she was diagnosed with bi-polar disorder – or manic depression as it used to be called. And throughout the rest of her life she fought to demystify this condition from misunderstanding and stigma.

She called her illness “an opportunity to be a good example to others”, talking about her condition without shame, and encouraging others to do the same.

Which is why I thought it appropriate for me to say a few words about my own episodes of depression. Mine are different to those Carrie used to have, without the same up and down mood swings. For me, its extended periods of feeling dark and empty, like being submerged in cold black water. They are bleak desperate times when no one can reach me and when, at extreme moments, I have struggled with the most self-destructive of thoughts.

And when I have been overtaken like this, people telling me its all going to be OK feels like an insult. Even worse are those who want to proscribe Jesus to make all things smiley and well. During these periods I feel that God is absent, uninterested or even non-existent. And whilst I know this sounds a lot like atheism – and indeed often feels like it too – it’s not really the same at all.

For despite the experience of the absence of God, there is something important that orthodox Christian theology has to say to me when I am trapped in this darkness – and that is: that we as human beings are not supposed to be self-saving creatures.

That was the ancient heresy of the Scottish monk Pelagius – he thought that human beings were capable of saving ourselves from the darkness, that we are able to pull ourselves up from our own boot-straps. The church officially disagreed. We are dependent creatures, the church insisted, fundamentally reliant on that which is outside our control.

The courage of waiting

Which is why much of the religious life, like depression itself, is constituted by the quality and courage of one’s waiting. Faith is often a determination to sit in the darkness without cheap consolation and to wait it out, to wait for the dawn to break.

Like the story in Luke’s gospel of Simeon and Anna who hung around in the Jerusalem Temple for years, with little idea of what they were waiting for. Eventually they found their light in the appearance of a baby boy, recently born in a Bethlehem shed, who was being taken to the Temple for the very first time.

Rescued from the dark

My favorite Christmas reading comes from the prophet Isaiah:

“The people who walked in darkness have seen a great light. Those who dwell in the land of the shadow of death, upon them have the light shined.”

And when I hear those words read out in church I often cry. And then whisper a quiet prayer of “thank you” that I too have been rescued from the dark.

Giles Fraser is vicar of St Mary’s Newington, near Elephant & Castle in south London. This text is taken with permission from his Thought for the Day on BBC’s Radio 4 which was broadcast today.

2 thoughts on “Light in the darkness: fighting the misunderstanding and stigma of mental illness – by Giles Fraser”