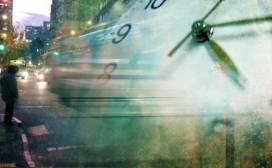 How often do you hear people make comments like: ‘I’m so busy’ or ‘It’s been a crazy week’ or ‘I just don’t know how I am going to get everything done’.

Being honest, I find myself saying things like this all the time.  I’ve been thinking – why do I say these comments?

My job and other commitments are demanding – and a family with three young children is never going to be an oasis of calm.  But that does not mean I need to go around advertising my busyness and inflicting it on others.

Christians can be worse than anyone at sharing their busyness.  Maybe it’s because we have the ‘normal’ stuff of work and family but with an added layer of busyness called ‘church’.  But it’s a disaster when church becomes just another thing on the ‘to do’ list.  What message does this convey to our communities?  “Come to church – we’ll give you more stuff to stress about!”

Release from the curse of busyness

In contrast, last week I went to an event where there were a number of people from a wide variety of different backgrounds.  At lunch I found myself sitting opposite a church leader whose attitude to his work shocked me.  Why?

Because he did the very opposite of telling us how busy he was.  Without any conceit, he spoke positively about the support he got, about the importance of prioritising and how much time he invested in others.  Most, notably (and unusually), he continually spoke of how much others were doing and how well they were doing it.  The table was shocked – this was outright blasphemy against the god of busyness.

But it was by far the most helpful thing I heard all day.  And like most conferences, it wasn’t said by someone at the front.

We are only a few days into Lent but I can already feel the benefits of taking some extra time to slow down and take time to reflect.  If Jesus needed to withdrew from the crowds and pray in solitary places then so do we.

Busyness is different to being committed.  I think that we should ‘spend ourselves’ for what we believe (Isaiah 58:10) – but that does not mean we should be hectic.  The fullness of life that Christian faith gives us is more to do with deeper levels of significance in our lives than simply a larger range of activities.

I think busyness can be the enemy of spirituality when it operates in the following ways:

Projecting busyness is a way of controlling events.  It is used especially when there is anxiety about other people’s demands overtaking you.  It can be used to say no to requests without addressing the real reasons for not wanting to do something.   Like the verbal equivalent of a porcupine’s needles, projecting busyness also acts as a protector against criticism.  ‘Can’t they see how busy I am?’

Being busy helps people avoid prioritising.  Rushing from task to task means that deeper questions can be avoided – so addressing underlying problems or doing things in new ways can be put off and side-lined.  Rather than helping engage in reality, busyness often helps us deny reality.  This especially happens in meetings – where ‘busyness’ is the perfect default excuse for the avoidance of a difficult decision.

Most deeply, being busy, and especially being seen to be busy, fulfils a dangerous need within us for significance.  We want to be seen as someone with major responsibilities, whose time is precious, whose life is full.  Unless checked, our insecurities create idols which we begin to orient our lives around.  Our need for acceptance becomes more important than our relationship with God and with others.

Busyness as the enemy of spirituality

Ten years ago I read the following quote from Eugene Petersen in his book Subversive Spirituality.   I didn’t like it – it offended my activist world view.  But last year I re-read it and it deeply challenged me.  I realised the depth of its truth and now I have it pinned above my desk:

“Busyness is the enemy of spirituality.  It is essentially laziness.  It is doing the easy thing instead of the hard thing.  It is filling our time with our own actions instead of paying attentions to God’s actions.  It is taking charge.”

18 thoughts on “Busyness: the enemy of spirituality”