On Monday I attended the launch of the report of the All Party Parliamentary Inquiry into Food Poverty in the UK. Over the last week, the whole issue has had an incredible amount of coverage in the media.

The Archbishop of Canterbury, Justin Welby, opened the event and said that hunger is Britain is an issue which should transcend party politics.  I knew what he meant – that there should be unity around the commitment to ending it.   But in reality, poverty can never be divorced from politics.  Especially when many people, like I do, believe that the increasing levels of food poverty are directly linked to policies brought in by this government.

And, as the rest of the event showed, there was plenty of politics knocking about.

Of the Labour MPs who spoke, Emma Lewell-Buck (South Shields) passionately emphasised the unjust structures which contributed to food poverty such as unemployment, low wages and inequality. And Stephen Timms (East Ham) focussed sharply in on the hardship caused by the huge rise in benefit sanctions.

In contrast, the Conservative MPs studiously avoided any links between food poverty and their policies. Scandalously, the Department for Work and Pensions (DWP) did not even send anyone to the launch to engage with its findings, such is their sensitivity to their policies being blamed for the rise in food bank usage.  But the Conservative MPs who did speak emphasised the issues more shaped around individual challenges.

Sarah Newton (Falmouth) spoke about the impact of mental health problems and Baroness Jenkin of Kennington made her now infamous comment that ‘the poor can’t cook’.  Of course it was a silly comment that she almost immediately apologised for – but the key point is that she was locating the key issue as a deficit of personal skills.

This diagram below illustrates the inter-relationship between the social and personal. 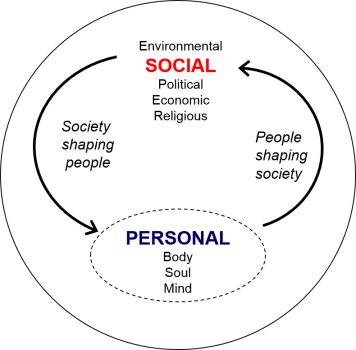 It is a dialectic relevant in all social issues – and is inescapably political.  How much do you believe that it is society and economic environment that shape an individual’s life?

Or how much is down to personal qualities and the belief that people can shape their own chances through hard work and endeavour?

So with regard to food poverty, how much is down to the structures of society and how much is due to the lack of personal responsibility taken by those who are poor?

Just a few hours after the launch I was involved in a practical example of this tension as I spoke with a formerly homeless ex-servicemen who is living in West London Mission accommodation.  I had to speak to him about the level of arrears that he has built up which was putting him at risk of eviction.

On one level he is a victim of injustice – he has suffered a lot and we are seeking to support him through what he has faced. But the key to the transformation of his situation is him taking personal responsibility for his situation and for paying his rent.  Simply blaming others, or ‘the system’ is a dangerous dead-end which helps no one.

The rise in the use of food banks shows very clearly that the UK has serious social issues to address.  As the report’s recommendations makes clear the dominant issues relates to societal structures which need re-adjusting. The injustice of rising inequality, zero-hours contracts, the premiums that poorer people pay for their utility bills and the harshness of benefit sanctions have all contributed to this crisis. These are all structural issues which we should be angry about and which can be solved if there is the political will.

The report is yet another example of the way that the practical action of the churches has been combined with a prophetic role in speaking out against structural injustice.  This is the synthesis we should always be looking for – compassion and justice – so that we continue to help people who are drowning in the river, but we also go upstream and find out who is pushing them in.

For more on this:

Also, the West London Mission are advertising for a Food Poverty Coordinator to oversee a new initiative in Lambeth.  It is an exciting new project which involves distributing grants to community groups to address issues of food poverty during the school holidays. For Job Description and application form see the WLM website.

3 thoughts on “Victims of injustice or just bad cooks? Whose responsibility is food poverty?”