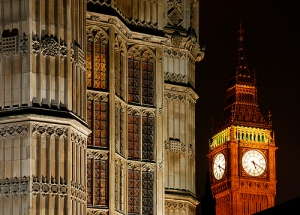 This Wednesday, the Bishop of Oxford, John Pritchard went with Rev Keith Hebden to deliver a letter to David Cameron’s constituency office in Witney.  The letter, signed by 46 Bishops and over 600 Church leaders, called the government to take urgent action about food poverty after it was revealed that over 900,000 people have used food banks this year.

David Cameron’s office refused to even open the door to the Bishop.  And after the priests refused to leave quietly and continued to seek to deliver the letter properly, Cameron’s staff called the Police.

This Lent has seen Bishops and other Church leaders make a loud noise about the reality of food poverty.  On Wednesday, the End Hunger Fast campaign had created front page news in three national newspapers.  The campaign has combined the compassionate activism of churches that run food banks with the concerns about the injustice of food poverty.  The practical and the political have been a powerful combination.

Anchored to the state

But the crazy thing is this: when the next vacancy arises and a new Bishop is appointed, who will make the announcement? Will it come from Lambeth Palace or Canterbury Cathedral?

No, the announcement will be made by the Prime Minister from No. 10 Downing Street.

Despite all the disputes and disagreements, the fact is that the C of E is still anchored to the state.

And of course, Easter is a good time to talk about the relationship between religion and state power.  The interplay between the Jewish establishment and Roman authority, both seeking to maintain the status quo which Jesus threatened, is at the heart of the Easter story. Jesus’ death was a political execution.

As regular readers of R&R will know, this is not because I advocate a withdrawal of the church from public life.  Whether anyone likes it or not, the church will always play a role in the political life of the nation.  This is why the early church was persecuted by the Roman Empire – because it challenged their authority.  The phrase ‘Jesus was Lord’ was intrinsically political – if he was Lord then Caesar wasn’t. This is why the New Testament always calls the church the ekklesia, which means public assembly.  It was never understood as a private cult with a purely personal message.

But the church’s public role should be one which bears witness to the radical message of Jesus.  And this is not one bound up with the trappings of state pomp and power.

Just as when Tony Benn declared he was leaving Parliament to ‘spend more time in politics’, the C of E should recognise that disestablishing itself would liberate it to be more influential in the public square.  The fact that 24 Bishops automatically get in the House of Lords, irrespective of their abilities to play that role, compromises Christian witness, rather than increases it.  It is a hangover from history.

Disestablishment would mean relinquishing this kind of power awarded in a previous age. This is not easy to give up: the institutional ego and vanity of the church and key individuals is easily tempted by being close to power.  Having key roles in national events such as coronations, Royal weddings and the baptism’s of future kings is seductive – but it is in forsaking them that the C of E will find greater integrity.

Make no mistake, however many disagreements happen, the C of E will have to make the first move to disestablish. The status quo suits the state too well.  As we have seen this week David Cameron, like many PMs before him, likes to herald the church’s ‘good work’ in communities.

But this simply illustrates the problem for the C of E. Just as people don’t want to get rid of pretty country churches with a kind but ineffective vicars, but this is not a role the C of E should accept. The Church that will survive (of any denomination) in the future will be a church of conviction and courage.

The church’s best role in society comes from its faithful service in local communities and its willingness to speak the truth to power.  It is a role which has been illustrated by the End Hunger Fast campaign and by previous campaigns for justice led by the church.  It is a role summed up brilliantly by Martin Luther King:

‘The church must be reminded that it is not the master or the servant of the state, but rather the conscience of the state. It must be the guide and the critic of the state, and never its tool. If the church does not recapture its prophetic zeal, it will become an irrelevant social club without moral or spiritual authority’