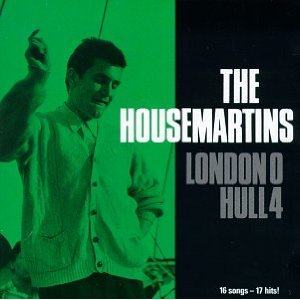 It was great to see Hull being awarded the 2017 City of Culture today.  People who have never been to Hull may struggle to appreciate its qualities, but like many who have lived there I still have a genuine affection for the city.  I spent three years in Hull studying social work and an extra year running the Student Union’s community action work.

I learnt far more outside the bounds of the campus than I did inside it – something about Hull helped shape and change me.

My first real awareness of the place came in 1986 when I was fourteen and I bought the Housemartin’s debut album London 0 Hull 4. It had quite an influence on me.  For a start, the cover was a blatant endorsement of cardigan wearing.  But there was more – I remember opening the album cover and reading the inscription ‘Take Jesus, Take Marx, Take Hope’.  It was not the kind of thing I had heard at church before.

A few years later that album was one of the main reasons why I decided to go to Hull University. (well, to be honest, the fact it was the only place that accepted me also slightly affected my decision…)

Hull is not that near any other major city – Leeds is an hour away – and as its on the eastern edge of the country, just above a major estuary no one really goes through Hull on the way to anywhere.  This helps contribute to an independence of spirit which has fueled creativity and a distinct identity.

You could talk about William Wilberforce, Philip Larkin or John Prescott but I think The Housemartins best sum up Hull’s fierce independent spirit.  Along with most of Hull they were not happy with the conservative government of the 1980s. They sang about the individualism, fear and selfishness that was destroying communities and the unemployment and poverty that lay behind it.  They combined cracking tunes with lyrics which were full of anger about the way the world was.

Think for a minute

One of the best tracks from that album was Think for a Minute:

“Something’s going on, a change is taking place Children smiling in the street have gone without a trace This street used to be full, it used to make me smile    And now it seems that everyone is walking single file
…And nothing I could say
Could ever make them see the light
Now apathy is happy that
It won without a fight”

“Apathy is happy that it won without a fight” Now that is a cracking line. (check out the video with the future Fat Boy Slim on the piano):

As a teenager in the 1980s, The Housemartins’ lyrics got me thinking about the world in a different way.  And when I went to Hull as a student in the early 1990s, the realities of life on the vast housing estates around the city and in the homeless centre I volunteered at had a big impact on how I saw the world.

It affected my politics because I saw far more clearly the damage and injustice of Thatcherism compared to what I had experienced growing up in south London.

So as well as a degree and some great mates, Hull gave me experiences that have helped shape who I am. So like many others, I am chuffed to see it get the kind of positive attention that it is enjoying today.