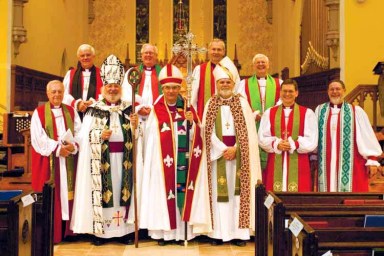 This week the Synod of the Church of England voted to accept legislation that will almost certainly lead to finally accepting women as Bishops.

I am in favour of this move for equality but that’s not what this post is about – there is enough of the internet filled already with those arguments. I think the C of E should radically re-consider the whole concept of Bishop-ness.

Two years ago I started the Faithfulness Matters campaign against companies like Global Personals who make money out of websites which promote people cheating on their partners. The campaign was supported by many Christian organisations including Fulcrum, Christian Socialist Movement, New Wine and Theos. In addition we approached many Bishops to see if they would support the campaign. Many expressed private support but gave various reasons for not ‘putting their head above the parapet’. Despite the C of E endorsing the campaign, only one Bishop signed the statement we produced and none were prepared to get involved publicly.

It was very disappointing. But it reminded me of the old joke about the point in a new Bishop’s consecration service when fellow Bishops gather around them to pray for the new man. Rumour has it that this is the point when they remove his spine.

I don’t want to be too harsh. There are obviously a lot of good, faithful Bishops who are great people. I am really impressed by the new the Archbishop of Canterbury, Justin Welby, who, like John Sentamu, has a gift for speaking out with clarity and passion. He is great news for the Church.

But I think the wider role of Bishop needs a fundamental re-think. In many ways the problem is not the fault of the Bishops themselves but the system they work within – because it combines a deadly cocktail of impotence and pomposity.

Everyone knows the challenges the C of E face. Like failing schools, many local parish churches need to be placed in the equivalent of special measures. These churches are going to need a great blend of both challenge and support if they are to survive. In any other organisation or company, the senior area managers would have a key role in shaking things up, implementing strategy and bringing change.

But in reality Bishops do not have that much authority over many of their clergy. Part of the reason has been because of the security given to clergy by the ‘freehold’ they have to minister in their parishes. But in addition, there is simply not a culture of challenging incompetence and asking tough questions. These factors severely curtail the amount that Bishops can do to tackle issues in their patch.

Too often, they are reduced to observing and occasionally refereeing the tribal in-fighting within their dioceses, with time and energy given to placating competing constituencies. This kind of inward-looking, ecclesiastical diplomacy is very different to the dynamic, missional leadership the church needs.

Despite growing up in the C of E, I have never got used to the pomp and ceremony which surrounds a Bishop. What Bishops wear in church services is just ridiculous.

How have we created such religion out of following someone who lived so simply? Have we ignored Jesus’ critique of those who “like to walk around in flowing robes and be greeted with respect in the marketplaces,and have the most important seats in the synagogues and the places of honour at banquets.”? (Mark 12:38)

The fondness for such bizarre dress borders on fetishism and increases the distance between ordinary people and the church. But of course the impotence is related to the pomposity. The lack of real power increases the need for show and pretence of grandeur. In what other organisations would senior people wear clothes which so ostentatiously differentiate themselves from others?

It’s not that I think the church should simply follow the example of the world around us. Deference can be important but these forms of institutional pomp are no good for anyone – least of all the Bishops themselves.

Male or female, Christian leadership should be distinct and different to the world around us but not in terms of the amount of gold on our cloaks or the silliness of our hats. I hope that the advent of women Bishops does far more than allow a wider group of people to wear such ostentatious clothing. Rather let’s hope it increases the amount of humility, moral courage and strong leadership within the church. After all, this is the example of the one we follow.

3 thoughts on “Women Bishops? I think the jury is still out on male bishops…”