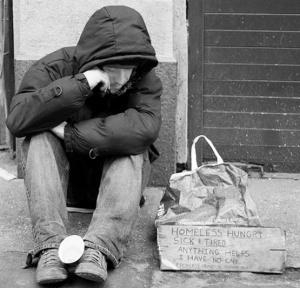 A while ago I was talking with a woman on Baker Street in central London who was begging and said she was homeless. She obviously had some form of drug dependency and almost certainly some form of mental health problems.

As I was talking to her about the centre that West London Mission runs for homeless people nearby, another woman came up and thrust £10 into her hand and said ‘God bless you’. The homeless woman’s eyes lit up and she expressed sincere gratitude as her benefactor continued their journey to work.

On one level, it was a lovely moment – someone in need being helped by a stranger. And the accompanying verbal blessing was more than just a throw-away comment; it indicated that the act was an expression of a desire to show God’s love and acceptance.

One thing is for sure – this act of generosity was certainly appreciated by the homeless woman a lot more than anything I said to her. Her response to the woman’s gift contrasted sharply with the distracted and uninterested response to anything I was trying to say. She was clearly relieved when I left her to continue her begging.

But was this really a lovely moment? Did that £10 make a positive difference to that woman? Was she ‘blessed’ in receiving it?

Ten years ago Jeremy Swain, the CEO of the homeless charity Thames Reach, launched a campaign called Killing with Kindness highlighting the harm done by people who give money to people begging. In his blog this week he reflected on that campaign and the others it had led to around the country:

“The reason why such campaigns are considered necessary is because of the incontrovertible evidence that the vast majority of people begging on the streets are doing so in order to purchase hard drugs, like heroin and crack cocaine. Naturally the street outreach teams are well aware of this. It is also regularly confirmed by the police following operations to arrest persistent beggars when, consistently, at least 70 per cent test positive for hard drugs. Usually the majority of those arrested are not sleeping rough but in some form of accommodation.”

In some people’s eyes the campaign’s message is still controversial. One key group of people who need to be won over by anti-begging campaigns are Christians who, like the woman I witnessed in Baker Street, want to be generous. We cannot avoid the fact that this is an issue which Jesus spoke very directly about:

“Give to everyone who asks you, and if anyone takes what belongs to you, do not demand it back.” (Luke 6:30)

I remember attending a meeting of the Christian homeless group UNLEASH (now merged with Housing Justice) who invited Jeremy to speak about the Killing with Kindness campaign after its launch. The meeting was chaired by the legendary priest, and founder of Centrepoint, Kenneth Leech. Many there either disagreed with Jeremy or were clearly nervous about what he was saying. I recall how Leech summed up the meeting by talking about the importance of the Christian tradition of alms giving to the poor, which kind of took the whole debate back to the square one.

What is your response?

Over the last 20 years I have always had pretty clear views on this subject. As opposed to many of my fellow Christians, I strongly agreed with the message of the Killing with Kindness campaign. You can read more about my view on this issue in the article When helping homeless people doesn’t help.

Next week I am participating in a debate on this issue. The reason for this post is that in the last week, I have been challenged by two people on this subject.

One said, quite straightforwardly, that as a Christian he feels he needs to simply obey what Jesus said about giving to those who ask.

The second person said that the recession, benefit changes and the clear need for Food Banks had changed the context. Now giving to people begging was justified because of a rise in poverty.

So ahead of this debate, I would really appreciate the honest views of anyone reading this. Please don’t feel you need any ‘expertise’ – just be honest about what you think. I am especially interested in responses to these three questions:

1) Does Jesus’ instructions mean that Christians should give to people however they will use the money?

2) Has the recession and increase in poverty increased the justification to give to people begging?

3) Does anyone have any experiences where giving to someone begging has really made a positive difference in that person’s life?

You can also see this previous R&R post from 2 years ago which includes a poll on how people respond to people begging.

29 thoughts on “Should the increase in poverty affect our response to people begging?”