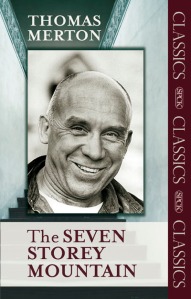 I have just finished reading The Seven Storey Mountain, the spiritual autobiography of Thomas Merton. Its a beautiful book which chronicles his journey through childhood and student days to becoming a Trappist monk.

Merton was born in 1915 and experienced an eclectic upbringing in USA, France and London. However, his early life was marked by tragedy as both his mother and father died when he was young. Academically gifted, he went to Cambridge University, but spent most of his time partying rather than studying. He was asked to leave after only a year and he went to New York to live with his grandparents. He wanted to be a writer but increasingly found the intellectual life he was trying to live as shallow, aimless and unsatisfying. This dissatisfaction was a key factor which led to his conversion to Catholicism.

The book was incredibly popular when published in 1948 and was credited with being a key factor in the sharp rise in young men entering monastic life in the 1950s. The version I read carried recommendations on the back cover from literary giants such as Graham Greene and Evelyn Waugh. And I can see why. Merton writes with a plain style which is unusually engaging and unflinching straightforward. As well as helping me understand Catholicism better, its a book which really moved and challenged me. It got under my skin.

After my recent post about self-promotion, I found Merton’s commentary on how he grappled with his ambitions to be writer particularly insightful:

“My chief concern was now to see myself in print. It was as if I could not be quite satisfied that I was real until I could feed my ambition with these trivial glories, and my ancient selfishness was now matured and concentrated in this desire to see myself externalised in a public and printed and official self which I could admire at my ease. This was what I really believed in: reputation, success. I wanted to live in the eyes and the mouths and the minds of men.”

These are words that all Christian writers or bloggers should take heed of. Furthermore, he pinpoints the subtle temptation of critical acclaim:

“I was not so crude that I wanted to be known and admired by the whole world: there was a certain naïve satisfaction in the idea of being only appreciated by a particular minority, which gave a special fascination to this urge within me.”

He locates the dangers of ambition down to the most basic of Christian temptations, a ‘self-idolatry’ which fuels a relentless need for achievement:

“There is nothing wrong in being a writer…but the harm lies in wanting to be one for the gratification of one’s own ambitions, and merely in order to bring oneself up to the level demanded by his own internal self-idolatry.”

The key theme in the book is how Merton allows God’s grace and truth to liberate him from the destructive and futile cycles he was locked into:

“But when my mind was absorbed in all that, how could I lead a supernatural life, the life to which I was called? How could I love God, when everything I did was done not for Him but for myself, and not trusting in His aid, but relying on my own wisdom and talents?”

For Merton the life to which he was called led to the extreme self-denial and solitude of a silent monastry. Yet, the irony is that the popularity of this book, as well as many others which followed, led to the kind of worldwide fame and the acclaim which he had forsaken. Through the willingness to deny himself, to carry his cross, God used his writing talents in an extraordinary way. The seed had to die to produce much fruit.

The book closes with Merton recounting words that he has heard from God. This line speaks prophetically and accurately of the outcome of the monastic life he has been called to:

1 thought on “Thomas Merton on self-idolatry and solitude”