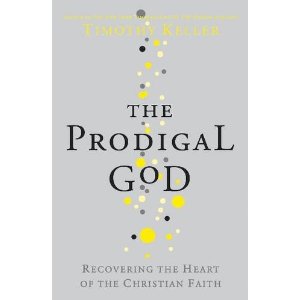 On holiday recently I read Tim Keller‘s book The Prodigal God. This is a short, accessible and beautifully fresh description of the heart of the Christian faith. I would recommend it to anyone – but especially to those who those who are outside of the church and who are sceptical about Christianity.

The book focusses on the well-known parable of the Prodigal Son. But despite its fame, Keller asserts it is also one of the least understood of Jesus’ stories. He argues that the core of the story is a prodigal God, whose recklessly extravagant love can meet the deepest needs of individuals and our society.

Keller makes absolutely clear that a genuine acceptance of God’s love and grace (i.e. being a Christian) will be expressed in a concern for social justice. It’s worth quoting him at length:

“In Matthew 25 Jesus describes Judgement Day. Many will stand there and call him ‘Lord’, but Jesus says, stunningly, that if they have not been serving the hungry, the refugee, the sick, and the prisoner, then they hadn’t been serving him (Matthew 25:34-40). There is no contradiction to what we have heard from Jesus in the Parable of the Prodigal Son. He is not saying that only the social workers get into heaven. Rather he is saying that inevitable sign that you know you are a sinner saved by sheer, costly grace is a sensitive social conscience and a life poured out in deeds of service to the poor.

Christianity, therefore, is perhaps the most materialistic of the world’s faiths. Jesus’ miracles were not much violations of the natural order, but a restoration of the natural order. God did not create a world with blindness, leprosy, hunger and death in it. Jesus’ miracles were signs that someday all these corruptions of his creation would be abolished. Christians therefore can talk of saving the soul and of building social systems that deliver safe streets and warm homes in the same sentence. With integrity.

Jesus hates suffering, injustice, evil, and death so much that he came and experienced it to defeat it and someday, to wipe the world clean of it. Knowing this, Christians cannot be passive about hunger, sickness and injustice. Karl Marx and others have charged that religion is ‘the opiate of the masses’. That is, it is a sedative that makes people passive towards injustice, because there will be ‘pie in the sky bye and bye’. That may be true of some religions that teach that people that this material world is unimportant or illusory. Christianity, however, teaches that God hates the suffering and oppression of this material world so much, that he was willing to get involved in it and to fight against it. Properly understood, Christianity is by no means the opiate of the people. It is more like the smelling salts.”

6 thoughts on “‘Christians cannot be passive about hunger, sickness and injustice’ Tim Keller”