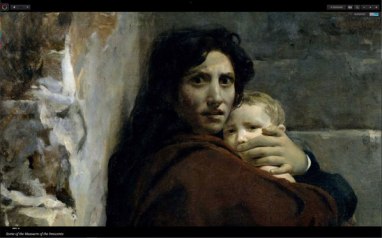 This morning, I watched my five year old daughter make her acting debut in her school Nativity Play.  It had everything to be expected – excitable shepherds, pretty Angels, proud parents and a clip-clopping Donkey.  It was cute, fun and everyone had a good time.

It’s important to remember though that Nativity Plays, like Children’s Bibles, are a highly selective bit of story-telling.  And it’s not surprising when you consider the original source material on which the plays are based.  When you consider the gritty realism of the actual story, it’s like a Ken Loach film has been re-produced by Disney.

The children’s version of the Christmas story may be OK for young children.  But as many children and all adults know, the world is not a happy place.  The horrific events in Newtown, Connecticut are the worst kind of reminder of the violence and destruction that humans are capable of.

As we know, the sugary coating which covers Christmas can make reality even harder to bear for those who feel rejected or in pain at this time of year.  As U2 put it in their song Peace on Earth:

Hear it every Christmas time
But hope and history won’t rhyme
So what’s it worth?

The other themes of the birth of Jesus

The actual Christmas story in the books of Matthew and Luke are full of themes which resonate in the real world.  The themes in the story speak of hope and love emerging from the chaos and pain of real life:

These are not cheery subjects – but they are all themes which surround the real Christmas story. Furthermore, they are themes we can recognise when we look at the real world around us.

And this is the point.

The love and grace of God comes to us in the midst of such gritty reality. God is not distant from the world but enters into it.

So rather than a sentimental escape from reality, Christmas is a celebration of what a down-to-earth God has done in the real world.  Born and raised in pain and difficulty, encountering rejection and death, yet overcoming the world with generous love.