Last month, I was 40.  It’s a time to stand back, to reflect and take stock…and invest in moisturiser.  Especially when one of my son’s friends thought I was 60!

In recent years, two of the biggest influences on me have been the writings and example of Dietrich Bonhoeffer and Martin Luther King.   In some ways, these two famous men have a lot in common: 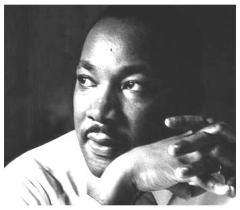 • Both had doctorates in theology and worked as church pastors
• Both ministered under the shadow of oppressive regimes and were drawn at young ages into the leadership of protest movements
• Both experienced threats, persecution and suffering and, like St Paul, both wrote influential theology from prison cells
• And both were only 39 when they died

I don’t want to indulge in hero-worship or glorify premature death.  But as I reached 40, I realise how much I have learnt from two men who never made it to that age.  These are three things I have learnt about faith from their example:

In 1939 Bonhoeffer was offered a teaching post in New York but instead chose to return home to be part of the resistance against Nazism:

‘I will have no right to participate in the reconstruction of Christian Life in Germany after the war if I do not share the trials of this time with my people.’

Similarly, after being awarded the Nobel Peace Prize, King turned down the safety of many academic positions in favour of continuing the struggle for racial justice.  As Charles Marsh puts it ‘King risked everything on the premise that the word of God is true when it names Jesus as the peace of the world.’

As you get older there are plenty of reasons to play it safe – career, mortgage and children all provide ample excuses for being boring.  But if we are seeking to follow the Jesus of the Bible, we can’t escape the fact that involves taking risks which might end up costing us something.

2) Faith swims against the tide

The uncomfortable truth is that many within the Church supported Hitler’s rise to power.  And in the 1950s in the US Southern States, it was often the Churches who were the fiercest upholders of racist culture.  Even among those who privately did not agree, few were prepared to make any stand.  Too often public beliefs moulded themselves around the status quo.

Bonhoeffer and King were both deeply distressed with these attitudes.  King wrote:

‘In the midst of blatant injustices inflicted on the Negro, I have watched white churchmen stand on the sideline and mouth pious irrelevancies and sanctimonious trivialities… many churches commit themselves to a completely otherworldly religion which makes a strange, unbiblical distinction between body and soul, between the sacred and the secular.’

And as Bonhoeffer pithily put it:

‘Only he who shouts for the Jews is permitted to sing Gregorian chants!’

In challenging injustice they swam against the tide.  They stood in the radical, and deeply Biblical, tradition of civil disobedience.  Of prophets such as Amos and Jeremiah who ‘spoke the truth to power’ and disturbed the status quo.  As Bonhoeffer wrote, the Church should ‘not just bandage the victims under the wheel, but to jam a spoke in the wheel itself’.

3) Faith involves facing up to fear

In early 1956 King was woken by yet another death threat on his telephone.  It pushed him over the edge. He went down to his kitchen and prayed ‘Lord I confess that I am weak now, I’m faltering, I’m losing my courage.  Now I am afraid.’

In response he heard the voice of God speaking to him ‘Stand up for justice, stand up for truth and I will be with you.’ As King said:

‘I heard the voice of Jesus saying still to fight on…almost at once my fears began to go.’

It was no idle threat.  Three days later, King’s house was bombed and his wife and young child only narrowly escaped.  Yet his experience of God’s voice made all the difference and gave him the courage to continue the non-violent struggle for justice.

Of all King’s speeches, it is his sermon Antidotes for Fear which has been the most helpful for me:

‘Human beings are dehumanized by fear…But they should not be afraid!  Jesus Christ, the one who was crucified and lives. He alone is the Lord of fear; it knows him as its Lord and yields to him alone. Therefore, look to him in your fear. Think about him, place him before your eyes, and call him. Pray to him and believe that he is now with you and helps you. The fear will yield and fade, and you will become free through faith in the strong and living Savior Jesus Christ.’

I thank God that I don’t live with the challenges which Bonhoeffer and King faced.  Despite living in a very different context I want to learn more from the faith, courage and commitment they showed.  However, we must not be seduced by the powerful lie that learning is simply the increase of intellectual knowledge.   I already have too many books about them.

To truly learn from them is to seek to follow their example.  So as I enter my forties, I want to take risks for my faith, to swim against the tide of injustice and to face up to my fears which so easily hold me captive.  I know that in doing so I won’t simply be learning from Bonhoeffer and King – I will be following Jesus.

4 thoughts on “Learning from those who never got there: what Bonhoeffer and King teach me about reaching 40”