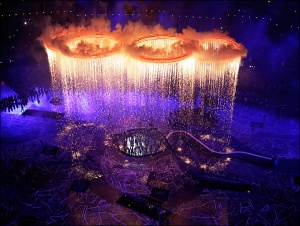 I love sport and have always enjoyed the Olympics but I have never watched an Opening Ceremony until last night. I guess I have never understood what the point of it all is. But last night, I was blown away by the power and pride generated by Danny Boyle’s crazy cocktail of comedy, history, dance and music.

Judging from the reactions of family and friends, from twitter and newspaper headlines, the Ceremony successfully blitzed any remaining cynicism about the Olympics. I don’t think it’s over the top to say that Britain awoke this morning a more inspired and excited country.

Boyle’s task was a daunting one. Celebrating the ‘best of Great Britain’ involves charting a course through choppy waters. No country has such a grand history of achievement, especially in its contribution to sport, yet no country wallows in post-colonial guilt and a love of failure as much as the Brits. The event had to steer through the twin dangers of sycophancy and cynicism like Odysseus avoiding Scylla and Charybdis. Yet Boyle navigated it perfectly.

This is why the event hit a rare chord with the British public – something deeper than a Royal Wedding or a Jubilee. I think it is because British people want to proud of their country but have struggled to know how to talk openly about their nation’s strengths and weaknesses; about what needs to be resisted and what brings renewal.

The ceremony reminded me of George Orwell’s patriotism which was powerful because he had the courage to both critique and appreciate his country. In his essay The Lion and the Unicorn (1940), he condemns the cynicism of the left-wing:

‘During the past twenty years the negative, fainéant outlook which been fashionable among English left-wingers, the sniggering of the intellectuals at patriotism and physical courage, the persistent effort to chip away English morale and spread a hedonistic, what-do-I-get-out-of-it attitude to life, has done nothing but harm.’

It was not that Orwell was afraid to criticise his country: ‘England is the most class ridden country under the sun. It is a land of snobbery and privilege, ruled largely by the old and silly’. But he was also appreciative of its strengths: ‘In England such concepts as justice, liberty and objective truth are still believed in…the belief influences conduct, national life is different because of them.’ These were strengths which made the country worth fighting for against the threat of Nazism.

The right kind of patriotism

For me, last night’s show embodied the kind of patriotism which Orwell wrote about. Rather than a blind or xenophobic nationalism, it was patriotism with these kind of qualities:

1) It’s honest about the ugliness of our past 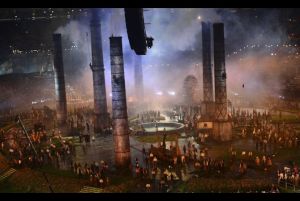 Last night’s show was honest about the ugly side of Britain’s progress. The rural idyll was swept away in a brutal industrial transformation. Never has Blake’s ‘dark, satanic mills’ been so vividly captured along with the avaricious nature of those who profited from the change. Progress and wealth came at a cost.

In celebrating the Jarrow Crusaders, the Suffragettes and those who arrived from the Caribbean on the Windrush, last night’s show cherished those who have been at the forefront of progressive change – those who have endured and fought against poverty, sexism and racism. It celebrated those who resisted injustice and who we now recognise as being on the right side of history – those whose faith in how things should be have helped shape the way things are.

3) It is proud of our country’s strengths

All British people should be proud of a National Health Service which provides health care free at the point of delivery to anyone who needs it. It was brilliant to see it get such global recognition last night. I wondered what the shrill despisers of ‘socialised healthcare’ made of it in the US. It is one example of the distinctive strengths that our country has – along with all the creative and cultural contributions we have made to the world.

4) It doesn’t take itself too seriously

Finally, the inclusion of Mr Bean on keyboards and the Queen’s parachuting with James Bond meant that the whole thing did not take itself too seriously. It implicitly appreciated the role of satire and comedy in helping puncture pomposity and pretence. Nothing could mark it out more sharply in contrast to the context of the last Olympics in Beijing.

There has been a lot of talk about the legacy that the games will leave when they are over. I hope we see more kids playing more sport in better facilities. But I also hope that last night’s ceremony marks a genuine step towards a patriotism which helps us be more honest and more hopeful about the future of our country.

4 thoughts on “Neither sycophancy nor cynicism: Danny Boyle and the right kind of patriotism”