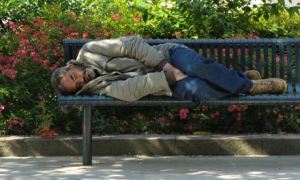 Earlier this week, I participated in a conference organised by Westminster City Council at Bloomsbury Baptist Church which focused on the growing problem of people from Eastern Europe sleeping rough in London.  It is one of the most pressing issues in homelessness at the moment as almost all day centres (such as WLM’s West London Day Centre) and night-shelter schemes have seen a huge increase in users from the European Economic Area (EEA) over recent years. As someone at the event said, “When you allow the free movement of labour, you can’t avoid the free movement of poverty”.

No one is under any illusions that this issue is going to be solved easily. The increasing poverty in the UK, changes in the benefits system and reductions of homeless services are creating enough of a challenge.  But when you couple it with the increasing numbers from EEA countries and the international pull into the capital created by the Olympics, it seems that a storm could be brewing on the streets in London in the coming months.

These challenges mean that the different groups involved in addressing homelessness to work together more than ever.  The conference worked well because it brought together local authorities, larger homelessness agencies as well as smaller charities and churches.   People came because of concern about the issue itself – and it was refreshingly free of the sub-plots of competition for new contracts or funding which smudge the issues.  Also there was little whingeing about what others should be doing and quality discussion about how we should respond to the current challenges.

Churches in the mix

As ever, churches and church-based charities made up a high percentage of the agencies there.  It was another sign that Christian activism remains right at the forefront of addressing homelessness.  At a local level there has been phenomenal growth of the Church’s Night Shelter schemes where 7 churches work together to run a weekly shelter.  On a national level, the Christian network Housing Justice continues to grow in significance and impact.

Whether you like it or not, Christian activism is making a massive difference to the lives of thousands of people who are sleeping rough.

However the approach of many church groups is not welcomed by all.  Tensions easily emerge between the perspectives of Local Authorities (and the agencies they commission to run services) and the churches and smaller voluntary groups.  The gap is widened by misunderstandings, cultural differences and mistrust.

Frequently the efforts of churches are misunderstood, dismissed or patronised by Local Authorities.  Sometimes they can be caricatured as naïve amateurs who do more harm than good.  Phrases like ‘harness the efforts of faith groups’ and ‘bringing the churches on board’ sound inclusive but too often it’s just about fitting them into the council’s agenda rather than genuine understanding of what they do and why.

However, that’s not the whole story.

On the other side, some churches and smaller organisations can be very stubborn about how they operate, resist change and spurn genuine offers to work collaboratively with others.  Passionate voluntary activists can demonise those responsible for the commissioned services – sometimes buying into half-baked conspiracy theories about the sinister motives to ‘clear the streets’.  (The closest to this was last year’s Westminster Council proposal to ban rough sleeping in a limited area around Victoria – but even these plans ultimately proved to be politically unacceptable and were withdrawn.)

No choice but to work together

To address the tragedy of homelessness, councils, charities and churches have to work together.  We have no choice.  Also experience tells me that the vast majority involved in tackling homelessness  are working from genuinely good motives.   We may do things differently but almost everyone wants the best for the people affected.

Working together does not mean all doing the same thing.  But all groups involved can benefit from developing greater understanding of each other, building relationships with others based on respect for their work and motivations.  It means having enought humility to listen to other views and having an openness to change.  Crucially, there needs to be  assertive and open debate about the issues involved.  We will not agree on everything – but if we keep the needs of rough sleepers right at the core of what we do then we will achieve far more together than working apart.

If you are at a church which is involved in homelessness work or is thinking about starting up a project then you might be interested in ‘Tackling Homelessness Together’ a free conference organised by Church Urban Fund on 29th March at Hinde Street Methodist Church in central London where I am based.   Alison Gelder, CEO of Housing Justice and I are speaking and there are many workshops on different issues. It should be a good event so please pass the details onto anyone you think might be interested.

Jon Kuhrt has worked with people affected by homelessness and poverty for 25 years. He is a former CEO of WLM and is now a government adviser focusing on how faith and community groups address rough sleeping. He lives with his wife and three children in Streatham, south London. He likes football...but loves cricket. View all posts by Jon Kuhrt