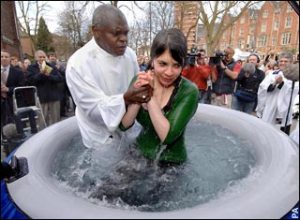 Currently I go to a Baptist Church and work for the Methodists, so perhaps I should not comment on who should be the next Archbishop of Canterbury.  But this morning, whilst waiting for my son to have his hair cut, I read The Sun’s editorial titled ‘Honest John’.  It outlined why their columnist, John Sentamu, should get the C of E’s top job.

I know it’s not fashionable to agree with a Murdoch publication – but I think The Sun has got it right.

My two main reasons are not to do with theology, church politics or even that Sentamu has beenvoted the most respected Christian in the UK.  It’s mainly based on meeting him a couple of times and seeing him in action.

No.1: He speaks in ways that people understand

Rowan Williams is an incredibly intelligent person and I am sure a wise, holy man who has endured hassles and pressure beyond which I can imagine.   But, as the Sun’s editorial puts it, ‘he is not a man blessed with the common touch’.   I have to agree because whenever I have heard him speak I find it very hard to understand what he is saying.  I tried to read one of his books once – after reading the first 3 pages twice I had to concede defeat.

In contrast, Sentamu has a knack of speaking in ways that people understand.   When he became Archbishop of York, I heard him interviewed on the Radio 5 Live Breakfast Show. The presenter said with a clearly cynical tone ‘So has Church of England really got anything to say in today’s world?’

His response was so sharp, clear and fresh that it burst out of radio.  This is not a precise quote but it was something like this:

His clarity and passion left the presenter speechless.  All she could say was ‘Well, I think the C of E just got a bit more interesting…’

Similarly when Sentamu has spoken out on issues like the banking crisis, Zimbabwe, racism and urban problems he has communicated in a way people understand.  In an age of massive theological ignorance and apathy this is what the church desperately needs.

No. 2: He is passionate and enthusiastic

Apologies for the name-drop but I had dinner with John Sentamu at my parent’s house many years ago.   I remember him speaking about how frequently he would get stopped by Police when driving in London.  He anger about racism and the attitude of the Police was clear and blunt.  But he had everyone laughing when he said how drastically the Police attitudes changed when he would slide his dog collar on and they realised he was a C of E clergyman.

Later on, when I lived in Kings Cross and he was Bishop of Stepney, he used to come to our Parish to conduct adult baptisms in the Caledonian Road Swimming Pool.  Getting into the shallow end of pool in his white robes, with his Bishop’s staff in hand, he would drag those being baptised from one side of the pool to the other. Bellowing at the top of his voice he would shout out:

‘THIS MARKS YOUR JOURNEY FROM CAPTIVITY TO LIBERATION!’

You could see the lifeguards thinking ‘Who is this guy?’ and he got everyone looking at what was going on.  But for the church congregation it was so exciting to be led and inspired by someone with such passion and enthusiasm.

What the Church needs

The Church should not listen too much to newspapers. Just like The Guardian’s affection for Rowan Williams, The Sun’s endorsement of Sentamu is not that important.  But its editorial today does say something important – Sentamu’s communication skills and passion speaks to ordinary people.  The UK Church today needs lots of qualities in these challenging times, but I would put these ones pretty near the top of the list.

1 thought on “I agree with The Sun: John Sentamu should be the next Archbishop of Canterbury”