On April 4th, I attended two events which marked the 50th Anniversary of the assassination of Martin Luther King.

The first was a packed, lunchtime service at Westminster Abbey, just over the road from Parliament.

The second was a rare viewing of the 1970 documentary King: a filmed Record…Montgomery to Memphis in a tiny cinema in Rotherhithe, south London.

One event was right in the centre of power and the other was very much on the periphery.

I had no issue with the content of the Westminster Abbey service. It was thoughtful and well-put together with contributions including a gospel choir, readings from Doreen Lawrence OBE and a sermon from Rt Revd Dr Karowei Dorgu, the Bishop of Woolwich.

My issue is more with the venue itself.  An intrinsic issue is that probably more than any other church building, Westminster Abbey is crammed with the legacy of imperial power, with its countless statues, memorials and stained glass windows dedicated to colonial and military leaders and campaigns. It puts me off.

But more significantly is that Westminster Abbey is a venue which provides such little connection between the speaker and the congregation. For starters, there is a rood-screen which blocks half the congregation from actually seeing and feeling a part of what goes on on the other side.

But also the incredibly high ceiling may inspire architectural appreciation but it is a disaster for any rhetorical inspiration.  It is a venue built for short Anglican homilies but not the passionate, rip-roaring preaching tradition that King was raised in and through which he so inspired his followers.

Methodist Central Hall, just a stones throw over the road, would have been much more suitable.  The non-conformist venue would have enabled everyone to engage and respond to the service in a way much more in keeping with King’s approach as a Baptist Minister. 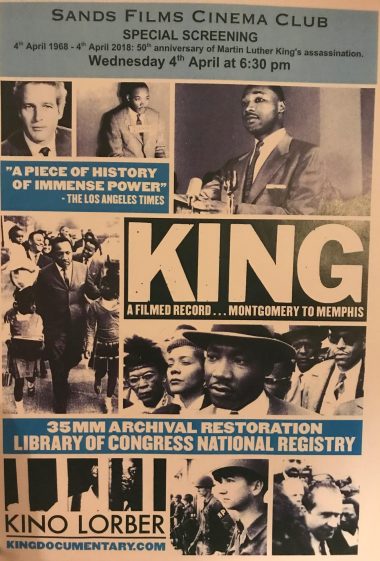 This contrast of responsiveness  struck me when I watched King: a filmed record…Montgomery to Memphis later that evening. It is 3 hours long but it went quickly because of the raw power of what has been recorded.  The film is further testimony to the Christian spirituality at the core of King’s work.

A crackly recording of the sermon that King delivered, aged only 26, at the start of the bus boycott movement in Montgomery is played in full near the start.

As well as the rhetorical eloquence of King, what struck me throughout the whole film was the inter-relationship between preacher and congregation. Almost every point is greeted with a response – whether an audible ‘Mmmmm’ or a shouted ‘Amen’ or ‘Preach it’. My favourite was ‘Make it plain, make it plain’.

As I sat in the cinema, it was interesting to note the reactions of the audience. A black man sitting in front of me embodied the responsiveness we saw on the screen – continually shifting excitedly in his seat and vocalising appreciation for the power and authority of King’s words.

In contrast, the whites in the room tended to only voice reactions in a negative sense during the parts of the film which depicted the aggressive racism of counter-protesters, the violence of the police or when civic leaders are openly uses the N-word.

It made me reflect that King’s movement was far deeper than just anti-racism.  Of course, it was about confronting structural racism, injustice and abuse of power. But it was a deeply spiritual search for the ‘beloved community’ to be manifested in concrete reality.

And of course, underpinning this journey was Martin Luther King’s belief in a personal God:

“More than ever before I am convinced of the reality of a personal God…it is a living reality that has been validated in the experiences of everyday life. God has been profoundly real to me in recent years. In the midst of outer dangers I have felt an inner calm. In the midst of lonely days and dreary nights I have heard an inner voice saying, “Lo, I will be with you.” When the chains of fear and the manacles of frustration have all but stymied my efforts, I have felt the power of God transforming the fatigue of despair into the buoyancy of hope. I am convinced that the universe is under the control of a loving purpose, and that in the struggle for righteousness man has cosmic companionship.” (Strength to Love, p153)

Christian activists must never lose connection with this ‘cosmic companionship’. This is the source of our inspiration and power to change ourselves and the world around us. Its where we will find the strength to love.