I’ll never forget my first match for my University Cricket Club. I was 19 and nervously excited. I had played a lot of league cricket down south but now I was playing alongside teammates from the northern leagues. They were a tougher breed.

In the changing room before the match, I was genuinely taken aback to see one of my new team mates deliberately squirt sun-cream onto the outside of his trousers and rub it into the material. He said ‘Keep throwing the ball to me, I’ll keep it nice and rosy’.

This week there has been a hail-storm of media coverage about the Australian cricket team cheating through using sandpaper to illegally alter the condition of the ball.  Roughing up one side of the ball helps the ball swing and aids the bowling team.

After what they were doing was exposed on the big screen on the ground, the young player actually doing the cheating, Cameron Bancroft, farcically attempted to conceal the sandpaper in his pants.

Immediately after the days play, the captain, Steve Smith and Bancroft faced the media and confessed their crimes. It turned out that Bancroft was carrying out a plan hatched by the team’s leadership. I doubt they realised what was just about to hit the fan.

The sporting world was stunned.  Cricket is a far bigger sport in Australia than it is in England and Steve Smith is the best batsman in the world.  When the Australian Prime Minister joined the chorus of condemnation you knew they were in trouble.

The reckless disregard for the rules along with the premeditated nature of the plan and the coercion of a young player to carry it out, drew widespread condemnation. In addition, the Australian team’s reputation for aggression, arrogance and self-righteousness meant any sympathy was in short supply. 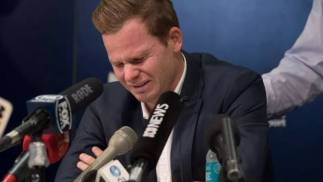 And it got worse. It turned out that even their televised confession was not truthful as key facts were covered up in an attempt to lessen the damage. A hastily completed investigation from the Australian Cricket administration has led to year-long bans for Smith, David Warner (the vice-captain) and a slightly shorter one for Bancroft.

After being sent home, Smith gave a painfully emotional press conference. It is hard to watch but it is a study of man who through foolishness and weakness has lost an incredible amount. He is truly broken.

I love cricket more than ever. I have coached a youth team for the last few years and last season I came out of retirement after a 15 year gap to play again for my old club side. Playing matches alongside my sons was a brilliant experience that I will always cherish.

Despite my love for the game, it is important to recognise that sport is ultimately unimportant. Eleven people chasing a bit of red leather around a patch of grass really does not mean much in the great scheme of things.

But sport represents and embodies things which are incredibly important such as teamwork, bravery, skill, judgement and character.  Sport gives opportunities to develop these qualities in a unique way.

Even deeper than these human qualities are the underlying issues of forgiveness, redemption and hope.  As a Christian, I believe that what has happened in the cricketing world resonates with the message of Easter.

Each week we host a mid-week church group at my house. This week to start the evening, I gave everyone a cricket ball to hold (we have plenty) and we discussed the cricket controversy (I had to explain a bit about swing bowling). I asked everyone to reflect on the things we don’t get right.

We all mess up

Gloating and enjoying the suffering of others, especially our competitors, is something humans enjoy. But the truth is that we all mess up – we are all weak, negligent and do things deliberately for our own gain. Rather than simply join in gleeful condemnations, this week is an opportunity to examine ourselves.

Smith, Warner and Bancroft have done wrong and are paying a bitter cost for their actions.  Time will tell whether in a cricketing sense they will be rehabilitated and come back successfully.

But the message of Easter is that in an ultimate sense, redemption is always available.  Jesus offered forgiveness even to those who condemned and killed him. And through His death and resurrection, God showed the world the kind of love and grace powerful enough to break any wrong-doing.

Cricket is great and has been a big story in the news this week.  But the message of Easter is the Big Story which endures and speaks to our deepest needs.  We all mess up – but hope and redemption is available for everyone.

5 thoughts on “Cheating cricketers and the message of Easter”