At Streatham Baptist Church last week, I had a debate with the senior Pastor, Phil Robinson about our mission as a church. Should we emphasise proclamation or social action?  What is more important – what the Church says or what it does?

As a preacher, Phil insisted that proclamation and evangelism was the fundamental imperative – people need to hear clear preaching and teaching which explains the gospel message so that they can make a personal commitment. An over-emphasis on social engagement and a cultural reticence to talk openly about our faith has muted Christians and deeply damaged the indigenous church in the UK.

As a social worker, I argued that the world is full of preachers (just go outside Brixton tube station as I do every day) spouting words that don’t connect with people.  We need to show our faith through what we do because actions speak louder than words. Instead of being obsessed with being distinctive, we need to connect with the community and work for social justice and the common good.

It was a passionate and got quite heated. Phil concluded ‘We must reject the social gospel which has sold out Christian distinctiveness and truth’. To which I replied ‘I would rather a social gospel than the heresy of individualism!’

At this point, we put this image up and asked everyone to talk in groups about what their view was.

After the discussions, we made it clear to everyone that both of us had deliberately taken extreme positions which exaggerated what we actually believe and polarised the debate. But we did this to draw out the tension within Christian approaches to mission that clearly exist.

These tensions are apparent in the Bible. Very early on in the life of the church, a racial dispute broke out about how food was being distributed to widows in need (Acts 6:1) . The twelve disciples decide to appoint others who can look after this ‘social action’ while they focus on preaching God’s word.

The irony that I have always enjoyed is that one of those chosen, Stephen, goes on to preach one of the longest sermons in the whole New Testament – and becomes the first Christian martyr for his trouble. So much for just ‘waiting on tables’!

I would go as far as to say that I believe the biggest challenge facing the church today is how we confidently integrate the message of the Christian gospel alongside our social action.  How do we bring together explicit words about God and implicit demonstrations of His love and care? 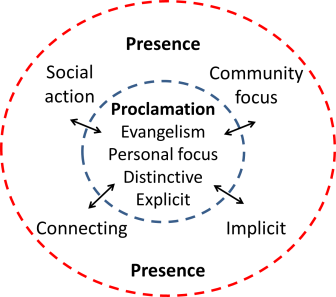 Instead of two separate circles, I think its helpful to see them dynamically dependent on each other:

1. Both sides are undernourished without the other.  Authentic Christian mission will always involve both words and actions, as well as personal and social change. On some issues we will need to be distinctive and different, on others we can find common ground and connect with those beyond the church. Faith should always be expressed both explicitly through words and implicitly through actions – this is part of the dynamic inter-relationship of being ‘in the world but not of it’.

2. God’s action through Christ has to remain the core. The heart of Christian faith is about what God has done through Jesus. All our words or actions should be pointing to or illustrating God’s grace, forgiveness and love. This is the best thing the Church can do. All Christians should be ready to speak personally about how this love is changing us and be prepared to stand out distinctively in an unbelieving world.

3. Faith in Jesus must be expressed in action. Christian beliefs must be clothed in actions which embody and authenticate our message. Genuine faith is incarnated in action. So much of Jesus’ sermon on the mount is about actions and the ‘wise builder’ in the famous parable is the one who hears the teaching ‘and puts it into practice’. Faith without deeds is dead.

It’s a fusion summed up well by my favourite verse in the Bible: ‘Let us not love with words or tongue, but with actions and in truth‘ (1 John 3:18).

4 thoughts on “What’s more important, what the Church SAYS or what it DOES?”