This is the text of a sermon given by Rev. Keith Hebden at St Paul’s Cathedral on Sunday 30th November, 2014 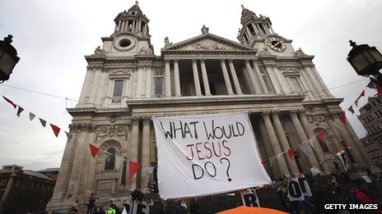 I travelled around 140 miles to get here from a town called Mansfield in Nottinghamshire. Mansfield is a warm-hearted and friendly town but one where thousands will struggle to get by this Advent and Christmas.

In the 1980s our government chose to sacrifice our community – and others like it – to the god of Money, to the idols of the markets. Now we have a scourge of low-employment at minimum wage on zero hour contracts. Both food bank use and theft of food have increased dramatically as some families struggle to feed themselves. Mansfield is on the edge of a Domination System that controls the lives of its citizens. 140 miles away, in the same nation, others sit down to expensive dinners to talk arms deals and stocks and shares.

High priests of the new gods

Last week, I was in a “Traditional English Pub” near Liverpool Street station, waiting to meet some friends. It was full of finance traders from the London Stock Exchange in suits. Ties loose, and pints of beer necked at speed they shook off the day in shouts and swaggers. I noticed one set had to share a bag of crisps despite their salaries – but that’s London prices for you: even bankers have to be careful!

I was listening-in, of course, dropping in and out of their conversations as I half-read my newspaper. A phrase used by one of these stockbrokers stuck with – although to him it was just a throwaway comment:

“Thing is, you’re a great trader, better than me, and you can make good deals and bad ones but at the end of the day… the market is king”

“The market is king”.  We say in shadowy pub corners what we rarely dare speak out loud. These men in matching swag and sweat are the high priest of the new gods.

Last week the Church celebrated the feast of Christ the King. But it turns out that it’s not Christ who is king but rather: the markets.

In order to really get to grips with what Jesus was doing when he intervened to dramatically in the Jerusalem temple we need first to understand the collusion of religion, market, and culture in the creation of what some people call “the domination system”

The domination system that Jesus was confronting occupied the physical space, world view, and legal precedents of everyone in his society: from those at its centre to those at its furthest edges. Just like today, “centre” and “edge” are both geographical and social.

At the physical centre of the domination system was the temple where Jesus caused such a raucous by turning over the tables, and driving out the animals that were being sold. Beyond that was Jerusalem, the political centre for the region and then outlying areas like Nazareth: poor and powerless places that Jesus taught and healed in throughout his ministry.

We know well the story heard this evening of Jesus riding into Jerusalem on a donkey while a crowd called him king and blessed his name. What is less well known it what a deliberate parody this was. At the same time that Jesus was arriving into the city at one gate with his donkey and small band of enthusiastic supporters, so Pontius Pilate was likely arriving at the opposite end of the city with fine horse and a massive crowd hired, coerced, and fearful supporters.

Jesus chose to occupy a space reserved for a violent and oppressive elite. And occupying that space with such carnival and subversion was more than both the secular and religious authorities of his day could bare.

“The Domination System” according to New Testament scholar, Walter Wink, “is what happens when an entire network of Powers become hell-bent on control”.

In our age, chief among these powers – or false idols – is ‘The Market’.

We hear it all the time on the news and in print, “The markets won’t like it”, “The markets are jittery”, “We have to appease the markets”, people lose jobs, homes, welfare and pensions all to satisfy the markets. People die in order to keep the markets happy.

People die in order to keep the markets happy.

Every day the high priests of commerce, government and establishment bring another of our public services to the altar of capitalism to be sacrificed; stoking the fires of ecological degradation. But as our idol gets more powerful it only becomes hungrier and even more capricious.

We thought that putting God aside would make us smarter and more sophisticated but it has turned our society into an idol-worshipping world of markets, markets, markets.

And whether you come from New Zealand, Angola, Stepney, or the ex-mining town of Mansfield in Nottinghamshire all of us live at the whim of these idols: these markets.

What hope is there then? The same hope that Jonah gave to Nineveh, that hope which Isaiah gave to Israel and the hope that Jesus gave to Galilee when he set his face to Jerusalem and turned over the tables of the money lenders and drove out the animals.

The hope is that the Church will stop being a voice of passive accommodation of the Domination System but instead become a Prophetic Church, capable of speaking truth to power and of naming idol worship just as Jesus did: Just as Isaiah did.

Isaiah quotes God’s displeasure with the sort of worship that is fabulously executed yet is performed by a community that has forgotten justice:

“Your new moons and your appointed feasts my soul hateth…Learn to do well; seek judgement, relieve the oppressed”

Jesus echoes these words in his actions when he and his disciples occupied the Jerusalem temple in a deliberate act of sabotage and propaganda in a building designed to show-off the power of the religious and economic elite of the Domination System of his day.

The temple was a vast building with huge vaulted ceilings, ornate designs; on the inside sacred song and liturgy were daily heard while on the outside traders exploited those who came from the very edges of empire to worship and learn about God and the meaning of life.

But when Jesus left the temple that day the money lenders would have gathered their coins, the vendors would have herded and recaptured their animals and the exploitation would have continued as though nothing had happened.

Perhaps sophisticated people called their occupation pointless or naïve. It suits the smug elite at the centre to do so: once the dust had settled and the troublemakers have ushered from the steps of the temple courts.

But I don’t believe the dust ever did settle.

Two thousand years later we remain restless for worship that has the integrity that Jesus and Isaiah called for.

As each of us leaves this place this evening and goes back to which ever periphery of the domination system that she or he came from. We take with us Jesus’ angry quote, “My house shall be called the house of prayer, but ye have made it a den of thieves,” and with a new resolve to smash the idols of Mammon and to build and occupy a new and just world in the shell of the old.

Keith Hebden is an Anglican Priest and Deanery adviser on social and environmental Justice in Mansfield.  He blogs at www.compassionistas.net

1 thought on “The Market is King – by Keith Hebden”