Half a million people used food banks in the last year in the UK. Charitable support programmes are rapidly expanding but nonetheless a quarter of families are shrinking portion sizes. 5,500 people were admitted to hospital for malnutrition last year.

The massive growth in the numbers going hungry has been fuelled by rapidly rising food prices (30.5% increase in 5 years), stagnant and falling real incomes, unemployment, casualization of work and incompetency in reform of the benefit system. 30% of those visiting food banks do so because their benefits have been delayed, 15% because they are under sanction.

It is great that so many volunteers and churches have responded to the rise in food poverty by starting up practical responses such as Foodbanks.  But we also need to care about these underlying causes: we need to speak up about the conditions which are creating this demand.  Our enthusiasm for social action must never obscure a concern for social justice.

As The Message version of Isaiah 58 puts it:

“This is the kind of fast day I’m after: to break the chains of injustice, get rid of exploitation in the workplace, free the oppressed, cancel debts. What I’m interested in seeing you do is: sharing your food with the hungry, inviting the homeless poor into your homes, putting clothes on the shivering ill-clad, being available to your own families.

“If you get rid of unfair practices, quit blaming victims, quit gossiping about other people’s sins, If you are generous with the hungry and start giving yourselves to the down-and-out, your lives will begin to glow in the darkness, your shadowed lives will be bathed in sunlight.” 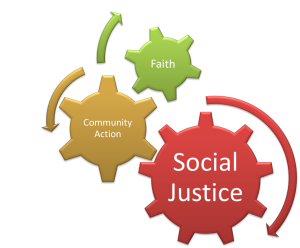 So this Lent will see the launch of a major national grassroots campaign, End Hunger Fast, to highlight the scandal of food poverty in the UK.  It has the support of many Bishops and other church and civic leaders.

The campaign has been put together by a grassroots group who are passionate about speaking up about what they see happening in their communities. And although churches and other faith groups are heavily involved we want as many people as possible to come and join the cause, whatever their beliefs.

The campaign is calling for:

How you can get involved