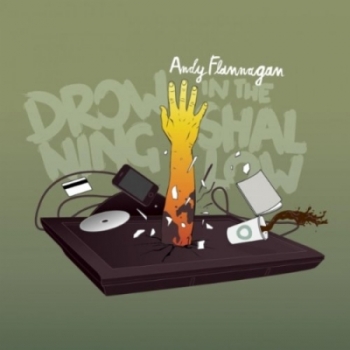 I must admit that I am not a big fan of a lot of contemporary Christian music.  Too often, I find the lyrics can be trite and too detached from the difficulties and complexity of real life.  Often laments for our broken world tend to be both more poetic and more moving from those outside the Church rather than those within it.

But this is a loss. For great music really does have a Heineken effect – refreshing the parts that books, talks and speeches never can.

I think Andy Flannagan’s new album Drowning in the Shallow has this kind of effect. Its 12 songs are a rich fusion of story and melody.  They inspire because Flannagan is willing to explore both the murky areas of our own souls and our hurting world and also shine a light of hope and divine love in this reality.  This makes it an authentic and refreshing collection of songs.

These are the four reasons why I rate this album:

1) These are songs of engagement

Each of the songs tells a story which is earthed in the real world: Fragile is written in the aftermath of the tsunami in Asia; Seven Storeys about a woman thrown to her death from a tower block; I Will Not Be Leaving is about an encounter with an abused and disabled child at orphanage which Andy supports.   Rather than simple illustrations of pain going on elsewhere, of a faceless injustice miles away, these songs carry the scars of the pain he has witnessed. They convey the original meaning of the word compassion: to ‘suffer with’.

This musical expression of social and political activism.  It is the soundtrack of engagement into the messiest and darkest of places.

2)  The blend of realism and hope

The album is full of gritty realism about poverty, pain and injustice.  Songs like The Reason are angry about the state of the world:

“While you’re waiting, the rich have been raping the poor
While you’re watching, their bricks have been made out of straw
Signing over your conscience to free market lies – this trickle tickle
Getting downwardly mobile opens your eyes to really living”

Yet, Flannagan never wallows simply in resistance, his songs are shot through with renewal.  Subtly, yet clearly, he sings of hope in a God who is restoring, rebuilding and renewing his world. The best song on the album, Pieces of April captures this blend of realism and hope perfectly:

A key to renewal is self-awareness and acceptance of guilt – as Tom Wright puts it, to know that the line between good and evil does not run between ‘them and us’ but through the middle of all of us.  The title track Drowning in the Shallow captures this non-radical reality for so many of us who long to be braver in our faith:

“I would plant my feet where angels fear to tread, But I am treading water, and feeling like I’m dead.

Failure is my fear, and caution is my call, But the surest way to sink is when you don’t move at all.”

We need this critique and the challenge it brings.  Songs like Ego and Addictions are honest about the way that ambition and desire for profile warp Church culture:

Dealing with such temptations are keys to spiritual health and cut right to the heart of what it means to be a follower of Jesus.   And whilst its true that faith should never be private – it must always remain personal:

To sum up – this is a collection of songs which helps me in my struggles to follow Jesus in the complexity and challenge of the real world.  I would recommend it to everyone to buy it and reflect on its message: it will help you swim in deeper waters.

You can buy Drowning in the Shallow on iTunes or Amazon