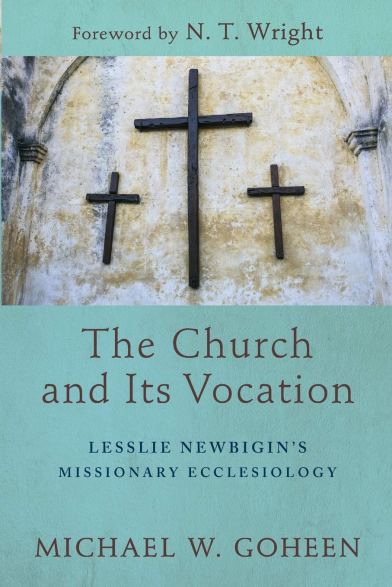 In 2009 I attended a conference in Birmingham to mark a 100 years since the birth of Lesslie Newbigin. I found it a disappointing experience.

The conference engaged with Newbigin as a theologian and thinker but neglected the thrust of his life as a missionary.  There was a lot on his views on modernism and post-modernism but little on the practical implications of his life and work.

Last month, I re-visited Birmingham and went to Newbigin House, a community established by Angie and Ash Barker in Winson Green.  This is the inner-city area where Newbigin served as a Pastor when he returned to the UK after his decades in India.  This was a diametrically different experience to the conference: deep faith was being put to work in practice in radical hospitality and social action. I left energised and inspired.

In this significant new book, Michael Goheen successfully combines both of these aspects of Newbigin’s life and work.  Few people have studied Newbigin as thoroughly as Goheen. He skilfully condenses and summarises Newbigin’s thinking but does so in the context of his life’s work, his character and his personal spirituality.  As Goheen writes of his subject:

‘He was a doer – that is clear – but he was also a thinker. He reflected often and deeply on his ministry praxis in the light of scripture’

‘He is driven not by any academic agenda but by the urgency of recovering our true identity so that we may truly serve God’s purpose.’

This appreciation of Newbigin as a practioner and as a person is a key strength of the book.  It is emphasised by Tom Wright in his Foreword, when he writes movingly about the personal and spiritual impact of knowing Newbigin and reading his books. ‘At my best I have simply been thinking Lesslie’s thoughts after him.’

In his Introduction, Goheen explains the focus of the book which is Newbigin’s teaching about the very purpose of the Church:

‘They are to be a people who bear in their lives the goal of universal history: the reconciliation and renewal God intends for all…not that the church ‘has’ a mission, but the very reverse: that the mission of Christ creates its own church.’

Therefore, in mission the Church re-discovers its identity, purpose and its re-vitalisation. All thinking about the Church – ecclesiology – must reflect its essentially missionary purpose.

The main section of the book are 6 chapters where Goheen has summarised Newbigin’s incredibly rich thinking about the missionary nature of the Church. It takes the reader through a journey from ‘the Bible as universal history’, the implications of the good news of the kingdom, the purpose of the Church and its life as a community, and then two chapters on the importance of a ‘missionary encounter’ with today’s culture.

The closing chapter draws together the journey with 8 areas of ‘Newbigin’s legacy for today’. Goheen excels at concisely summarising Newbigin’s thinking. One example is his challenge to individualistic concepts of salvation which are rampant in Western Christianity:

‘Humans are not created as discrete individuals, nor will they be redeemed as such…Salvation is the healing of the lost shalom, the reconciliation of what was alienated, the knitting back together of separated fragments.’

My only criticisms would be that the book offers little in terms of a critique of Newbigin’s legacy.  One example that there is no practical evaluation of Newbigin’s impact in the churches and denominations that he played a role in. How much has the Church of South India, the United Reformed Church and the World Council of Churches embodied his thinking? What practical difference has his books led to?

Another aspect overlooked is the impact that Newbigin’s missionary ‘career’ had on his family life. The author refers to his own family with great affection but any reference to Newbigin’s own family are almost entirely absent. Newbigin’s eldest daughter Margaret has recently published a memoir called ‘Home is Where’ which captures the emotional cost of her father’s lifestyle. This aspect would have been worthy of mention.

With these reservations aside, The Church and Its Vocation is a fantastic study of Newbigin’s thinking about the Church and its missionary role. Those who are ‘deconstructing’ their faith or are losing confidence in the gospel’s relevance will find great resources here.  Goheen has captured both the theological depth of Newbigin’s thinking but also the spiritual purpose of his life.

‘Confidence in God’s work…led Newbigin to an unanxious witness that was full of joy, boldness and trust.’

This captures what reading Newbigin has done for me. He has helped reduce my anxiety about my faith and increased my joy and boldness. This is the main reason why I encourage anyone to read his books and why I thoroughly recommend this book about his thinking.

Buy The Church and its Vocation: Lesslie Newbigin’s Missionary Ecclesiology

Also on G+T: Proper Confidence in the Gospel: the theology of Lesslie Newbigin

2 thoughts on “‘The Church and Its Vocation: Lesslie Newbigin’s Missionary Ecclesiology’ by Michael W. Goheen [review]”