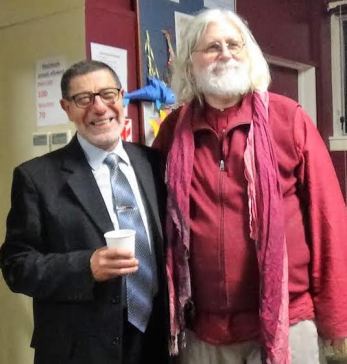 When I was last in Christchurch, I went to the Masjid Al Noor mosque. I sat at the back on a chair with the older believers during their Friday prayers.

It was these believers who were specially targeted and systematically slaughtered by Brenton Tarrant this week.

At the time of writing, I do not know if my friend, Hajj Ibrahim Abdelhalim,  the Imam of the Linwood Mosque, (pictured with me), is alive or dead.

NZ Prime Minister, Jacinda Adern, was appalled at what she called ‘an extraordinary and unprecedented act of violence’. She went on to say

‘Many of those who will have been directly affected by this shooting may be migrants to New Zealand, they may even be refugees here. They have chosen to make New Zealand their home, and it is their home. They are us. The person who has perpetuated this violence against us is not. They have no place in New Zealand.’

And now we know the NZ Prime Minister was right. The perpetrator was not a New Zealander. He is an Australian. ‘One of us’.

And if there is any doubt Brenton Tarrant is ‘One of us’, one of those in the highest office in Australia leapt to his defence. Shortly after the attack Australian Senator Fraser Anning was quick to blame the victims:

“As always, … the media will rush to claim that the causes of today’s shootings lie with the gun laws or those who hold nationalist views, but this is all cliched nonsense. The real cause of bloodshed on New Zealand streets today is the immigration program which allowed Muslim fanatics to migrate to New Zealand in the first place.”

We Australians must admit there has always been a strains of intolerance and violence lurking just beneath the surface of our civilisation.

These have erupted in breathtaking acts of bigotry and brutality from time to time – whether its killing Aboriginal peoples to take their land, killing Chinese labourers to stop them ‘taking our gold’ or killing Muslims for daring to immigrate to ‘our country’.

We need to acknowledge our propensity for intolerance and our proclivity for violence, and the fact that, given those factors, we cannot continue to sow seeds of animosity without reaping atrocities, such as this, committed by the extremists among us.

It is not enough to condemn the attacks, we need to deal with the underlying attitudes in our culture that aid and abet these attacks. How can we deal with our propensity for intolerance and our proclivity for violence?

After the holocaust, the Jews did a study of Germans, whom they called ‘Righteous Gentiles’, who effectively resisted the intolerance and violence unleashed under the Nazis.

They found that these resisters had three characteristics in common that made the difference:

Security may track threats. Police may arrest perpetrators. But there is no quick fix. No short cut.

If we want to create a culture in our country that resists the current Islamophobia, we need to encourage everybody we know, in every way we can, to develop their emotional capacity for empathy towards Muslims, their intellectual commitment to the rights of Muslims, and their personal relationships with Muslim friends.

Dave Andrews is an Australian community activist, theologian and author