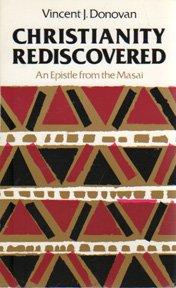 Vincent Donovan was a Catholic missionary who worked among the Masai tribes-people in Tanzania in the 1960s.  He became increasingly concerned about the state of missionary work.

After a 100 years of missionary activity in East Africa, the Catholic Church was very busy, running several schools, a major hospital and health outreach over a vast area.

But no one was talking to anyone about God.

He wrote the following in a letter to his Bishop:

‘The relationship with the Masai, in my opinion, is dismal, time consuming, wearying, expensive, and materialistic. There is no probability that that one can speak with the Masai, even with those who are our friends, about God. And there is no likelihood that one could actually interest them to the point of their wanting to discuss or accept Christianity.’

Donovan decided to do something about it.  As he states memorably:

‘I am suddenly weary of the discussions that have been going on for years as to the meaning of missionary work, weary of the meetings and seminars devoted to missionary strategy.  I suddenly feel the urgent need to cast aside all theories and discussions, all efforts at strategy – and simply go to these people and do the work among them for which I came to Africa.’

Donovan’s book, Christianity Rediscovered, is all about his efforts to do exactly that. He radically challenges the accepted approaches and works hard to recast Christianity into concepts that can be grasped by those to whom the message is completely alien. It is an inspirational book.

After his first meeting with Ndangaya, an influential tribal elder, ‘to talk about God’, Donovan received this response:

‘Ndangaya looked at me for a long time, and then said in a puzzled way, ‘If that is why you came here, why did you wait so long to tell us about this?’

‘Why did you wait so long to tell us about this?’ It is a phrase that has challenged me ever since.

‘Dealing with the real issues’

Another missionary who reflected deeply on these issues was Lesslie Newbigin. In the late 1920s he went to volunteer in a deprived area of Wales to run activities for unemployed men.

Although it was a Christian initiative, due to concerns about proselytizing ‘anything in the way of religion was excluded from the programme’.  Newbigin reflected on this experience:

‘As the weeks went by, I became less and less convinced that we were dealing with the real issues…these men needed some kind of faith that would fortify them for today and tomorrow against apathy and despair. Draughts and ping-pong could not provide this.’

Newbigin and Donovan are wise guides worth listening to. Both spent much of their lives as missionaries outside the countries of their birth, yet their insights have been most influential to the Western Church which sent them abroad.

It is important to say that neither of them are ‘conservatives’ who were against the Church’s social and political engagement. Rather, both were acutely convinced of the Church’s unique calling. Their writing is incredibly relevant for today.

Both Donovan and Newbigin have challenged me, in both my paid work with homeless people and in my community work with young people, to connect the Christianity of words and the Christianity of deeds. They have stirred discontent in me with the secularisation which so easily infects Christian initiatives and  have inspired me to strive for an integration that is more faithful to Biblical Christianity.

More than ever, the UK Church displays its commitment to social action.  Street Pastors, Foodbanks, Night Shelters and a whole plethora of activity has flourished over the last 15 years.

But my engagement in this growth of work has reinforced in me the conviction that the Church must never forget the distinctive message that it alone can embody and share.  It is the commitment, through prayer, words and action, to this message that gives the Church its unique calling.

In the words of Justin Welby, this is what makes the church more than ‘just an NGO with a pointy roof’.

I believe that confidence is the most critical factor. It is not so much ‘balancing’ social action and evangelism, as allowing the message of faith to flow through everything that we do.

And as well as our willingness to speak personally, our confidence should also be rooted in social relevance of our message.  In the face of division, despair and meaninglessness, divine hope, affirmation and forgiveness are what our communities most need.

Of course, this message needs to be clothed in acts which embody it, illustrate it and give it integrity. Actions do speak louder than words.

But words are needed – because it is with words that we point beyond ourselves, to a true and lasting hope that God has given us through Jesus.

3 thoughts on “Is the Church just ‘an NGO with a pointy roof’?”