This post is based on a sermon preached by Stephen Kuhrt at Christ Church New Malden on Sunday 20th November 2016. The bible reading was Matthew 7:13-20. 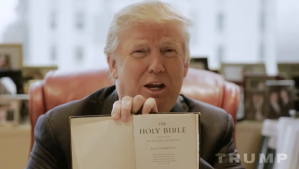 What is a Christian response to the election of Donald Trump?

Like the Brexit vote in the UK, Donald Trump’s win is a massive wake-up call for the establishment. It is a major sign of people’s disillusionment with the political class.  It’s a revolution, as people who never turned out to vote previously, have done so this time placing in power someone whom they believe is going to sort things out for them.

Our bible reading this morning speaks into this situation because it’s all about how to respond to leaders other than Jesus. Here, at the end of the Sermon on the Mount, Jesus sets out the stark choice between his programme and the other approaches that were on offer.

And one of the things that we need to pick up if we’re going to see its proper relevance to today, is how deeply political Jesus was. We can’t depoliticise Jesus and shift his words into a separate category marked ‘spirituality’ or ‘salvation’.

Absolutely no one during Jesus’ earthly ministry, least of all Jesus himself, would have suggested that issues of spirituality or salvation could be separated from the political issues that the people were facing.

The Jews were an occupied people, a people who felt powerless and exploited. Remember – crucifixion was a sign of Roman political power long before it became anything else. Many in Israel were angry and were looking for God, through some anointed leader, to bring freedom from oppression.

And Jesus steps directly into this situation with a radical vision: God will bring the freedom that you long for. But it will come through means of love and service to others, not violence or force.

That’s what those Beatitudes are about. That’s what ‘love your enemies and pray for those who persecute you’ is all about. It was not an other-worldly spirituality about ‘how to go to heaven when you die’. It was about how God’s kingdom is coming to the here and now: ‘on earth as it is in heaven’.

But Jesus was also aware that his wasn’t the only vision around.  This is why he warned his listeners about the alternatives that were being and would be presented by others. And it’s here that, we might can see a number of parallels today about how we should respond to the vision and agenda set out by someone like Donald Trump.

There are two points from the passage that I want to draw out in application to this this morning. The first is about taking the hard path and the second is that we should reject false prophets.

When we’re provoked by someone behaving badly, whether its a neighbour or someone at work, the easiest thing in the world to do something bad back in return. The same is true on a political level – when faced with challenges it’s the easiest thing in the world to stigmatise people who are different, to make rabble rousing speeches about banning Muslims from entering your country or building a wall to keep out Mexicans.

Its easy to buy into the simplistic solutions that says this will put everything right. But actually it’s an easy path that leads to destruction.

Donald Trump is responding to genuine problems with easy and ultimately destructive answers. Yes there’s a problem with the establishment and with the political status quo. But simplistic solutions based upon encouraging hate and division can only lead to destruction.

Christians are called to reject this and take the much harder and more difficult path that declares that the only way that evil can be overcome is with love.

The second point his that we should watch out for false prophets, We need to be wary of those who promise all sorts of fine things and judge them by what they actually produce.

This is the reason why we can’t ignore the misogynistic, racist comments that Trump has made. We can’t dismiss it as ‘locker room talk’ or say it irrelevant because its policies that matter. And we can’t pretend its all ‘in the past’ because it is too consistent with the recent attitudes that he has shown. A good tree produces good fruit but a bad tree produces bad fruit.

In tough times, Jesus says, you’ll be surrounded by false prophets so its vital that you understand how to assess them. I believe that Donald Trump is perhaps the most obvious and dangerous false prophet that’s currently on offer.

The challenge to Christians, as we enter into this more divisive, more extremist and frankly more dangerous world, is to model the radical love of Jesus.

We’ve got to be people that demonstrate the power of love by creating communities that welcome everyone equally.

We’ve got to be people who challenge and change the status quo through service and love rather than division and oppression.

We’ve got to people who campaign for justice and take on the establishment but with the weapons of truth and justice.

We’ve got to be people who look out for the false prophets and avoid their simplistic and easy solutions.

Why? Because we know, as followers of Jesus, that love trumps hate.

2 thoughts on “Love Trumps Hate: responding to the US election – by Stephen Kuhrt”