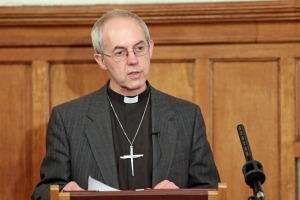 Last week I went to a lecture given by the Archbishop of Canterbury, Justin Welby, at Lambeth Palace.  Since becoming the C of E’s top man, Welby has caught the public’s imagination and headlines through his attacks on pay day lenders, his concern for food poverty and his willingness to challenge the government. Few could deny Welby’s commitment to social and political action.

But this was not his subject in this lecture. He was speaking about Evangelism and Witness, how the church speaks publicly about the person at the heart of the whole message of Christianity: Jesus himself.

Right at the start of his lecture, Welby stated boldly why the Church even exists:

And he was blunt about what this means for individuals:

He acknowledged that a term like evangelism (‘the dreaded ‘e’ word’) has acquired much baggage through being tainted with bad motives and coercion.  Despite this, it remains central because evangelism is “the news of Jesus Christ. His life as the light breaking into this dark world for us. His death as the fount of our redemption. His resurrection as the hope of all. This news must be told, or how will people know?”

He acknowledged that faith was shared through actions, but he bluntly dismissed the old adage attributed to St Francis of Assisi “Preach the gospel at all times, where necessary use words”, so often trotted out in such discussions:

“Lay it aside, put it down, forget it. Don’t even think about it. Mainly for the reasons that he almost certainly didn’t say it, and even if he did, he was wrong.”

Welby spoke passionately and straight-forwardly. His words were deep without being complex.  He never allowed his personal commitment to be obscured through inaccessible theology.  And his message was clear: the gospel of Jesus is good news which every Church and every Christian must be utterly committed to sharing.

In his lecture, Welby was speaking about the core essence of the Church’s message.  The gospel of Christ is the bedrock on which the social and political work of the Church is based. It reminded me that Christian social action needs to acknowledge the dependency it has on faith itself staying alive and real. 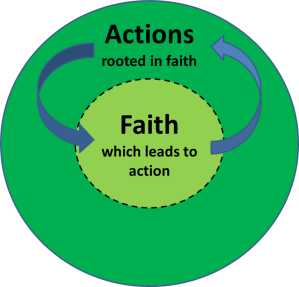 The Church must act for justice and compassion, but it also needs to speak about why it is doing these things.  Our faith must lead to action, but we must ensure that our actions remain rooted in faith.

This is the integrated faith that the Bible continually speaks of.  Old Testament prophets such as Isaiah, Jeremiah, Micah and Amos condemned religion that was detached from the reality of life and ignored the injustices of the day.

And in the New Testament, the teachings of John the Baptist, Jesus, Paul and John all speak of faith which produces fruit in people’s lives.  Faith without deeds is dead. A tree is known by its fruit. ‘Let us not love with words or tongue, but with actions and in truth.’ (1 John 3:18)

Christians who are committed to social activism must recognize the importance of evangelism. For without such a commitment, the Church in the UK will wither and die. We have to remember that the Church’s social and political impact is derivative – ultimately it relies on people’s encounter with Jesus and their willingness to participate in communities which express this belief.

Christian social action and work for justice is a vital fruit of faith. But this fruit does not grow by itself.  It is fruit which is dependent on strong roots which draw on the best resources that God has provided.

So, alongside our concerns about poverty and injustice, we must never forget the Church’s core task from which everything else grows. And we should be grateful for leaders like Justin Welby who can express this task so well.