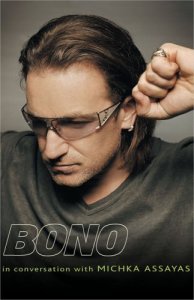 “I remember coming back from a very long tour…Got home for Christmas, very excited of being in Dublin. On Christmas Eve, I went to St Patrick’s Cathedral…it’s a kind of tradition on Christmas Eve to go but I had never been. I went to this place, sat. I was given a really bad seat, behind one of the huge pillars. I couldn’t see anything.

But I was falling asleep, being up for a few days, travelling, and because it was a bit boring, the service, and I started nodding off. I couldn’t see a thing. Then I started to try and keep myself awake studying what was on the page.

It dawned on me for the first time, really.   It has dawned on me before , but it really sank in, the Christmas story. The idea that God, if there is a force of Love and Logic in the universe, that it would seek to explain itself is amazing enough. That it would seek to explain itself by becoming a child born in straw poverty, in shit and straw…a child…I just thought ‘Wow!’  Just the poetry…Unknowable love, unknowable power describes itself as the most vulnerable.

There it was. I was sitting there, and its not that it hadn’t struck me before, but tears came down my face, and I saw the genius of this, utter genius in picking a particular point in time and deciding to turn on this.

Because that’s exactly what we were talking about: love needs to find form, intimacy needs to be whispered. To me, it makes sense. It’s actually logical. It’s pure logic. Essence has to manifest itself. It’s inevitable. Love has to become an action or something concrete. it would have to happen. There must be an incarnation. Love must be made flesh.”

All text taken from Chapter 6 of Bono on Bono: conversations with Michka Assayas, 2005 (Hodder)

1 thought on “Bono on Christmas: ‘Love has to become something concrete’”

Grace and truth are right at the heart of the Christian faith. They are also practical values which are fundamental to making the world a better place.  More details.