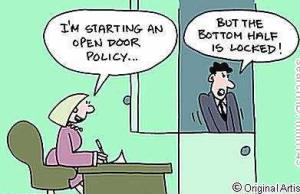 Warwickshire County Council has just gone through a 6 month process to slash 26% from a budget over 4 years that had already been cut by a similar amount since 2010. Up and down the UK the picture is the same: older peoples’ care, firefighters, road maintenance and libraries all under threat.

As we approached the big Budget Day (I was going to shorten this to B-Day before realising the potential for bathroom furniture confusion), I went online to get some figures for someone supporting people who are homeless who might be affected by the cuts.

I was astonished to find that none of the financial proposals about specific services had made it the website. All the other agenda items and their appendices were sitting there…except for the really important ones.

Councils all talk a good game about consultation. Warwickshire ran a ‘Let’s Talk’ campaign in the autumn with a budget simulator so that people could work out what they’d cut and whether they’d raise Council Tax. So far so good… apart from only 661 people out of 500,000 took part. That’s 0.13%

Why was the figure so low? I reckon it’s because people don’t believe they’re having a real say in the decision making process about things they care about. And they’d be right.

When push came to shove they were locked out of the behind the scenes decision making on individual figures, even if Councillors themselves had more open discussions than previously. It’s like building a house where the Council do all the designing, structural work and decoration before asking the public to choose the colour of the door knobs.

Last B-day (what the heck) in February 2013 a massive cut to Childrens’ Centres was agreed. There was barely a murmur, because no one knew. When it became properly public after the election in May there was an outcry, but it was too late – the decision had already been made.

People and groups interested in particular services like libraries, older peoples’ care or roads need to know what’s going on well before a decision is made. Yes, there would be a bun fight as groups lobbied to save their service, but it would also unearth some of the real practical issues about the knock on effect of cuts otherwise hidden behind 100s of rows of figures.

Most politicians are frightened of allowing people in on this kind of decision making process so early. They worry that people won’t understand the difference between a draft proposal and a final decision. That they’ll want to save popular services without understanding the importance of other ‘behind the scenes’ stuff. That people will get angry and shout and be ‘irrational’.

Well, I think that’s our job. To take the argument to people and explain why something’s important, even if it’s not glamorous. To lead, not by hiding, but by putting our head about the parapet and setting out what we think. To accept that we’ll get shouted at sometimes, but that it’s worth it to create a culture where people know that they’ll be treated like decision making adults rather than children who can’t be trusted to hold the family silver.

All of us, Councillors and officers, MPs and civil servants, have got a responsibility to share important stuff early with people and groups we know who will be interested, even if they’re likely to completely disagree with us and cause ‘trouble’.

That really would be democracy in action.

1 thought on “Democracy in action…or not”