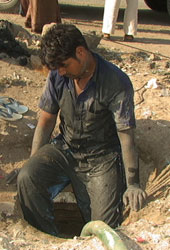 I met recently with Manohar, a South Indian priest and activist, in his office in central Bengaluru (Bangalore). Manohar is a Dalit and a determined champion of the rights of the Dalits whose spiritual and political solidarity with the oppressed are integral to each other. He told me of a community of Dalits whose job it was ‘to carry human waste in containers on their heads’ in order to regularly clear out sewer systems.

If this was not degrading enough, local developers decided that the scrubby land these people lived on was of value and the Dalits must be moved on. To ensure this they cut off their utilities and encouraged local people to abuse them. ‘If there’s something worse than being a shit-shoveler it is being a shit-shoveler with no access to water for washing!’

The ‘crushed of the earth’

The Dalits, meaning the‘crushed of the earth’, are those in India who are considered unclean by birth and polluting by contact. There are around 400 million Dalits in India alone and many are in bonded labor and involved in degrading or dangerous work: tanning leather, street sweeping, removing human waste manually, and so on. They are almost always landless and segregated, especially in rural areas.

Instead of buckling under such pressure, and despite generations of learning to quietly acquiesce, this particular community chose to publicly lament. In the heat of the day a small group of men arrived in the dusty square outside the town hall.

A God-view of oppression

They arrived with wide-brimmed shallow containers of human waste balanced precariously on their heads, exposing to the public witness the nature of their work, work that is formally illegal but still socially enforced. They then smeared the excrement over their heads, clothes and bodies; allowing the stinking waste to dry and crack in the sun. How does that compare with signing a petition for getting a point across?

None could doubt the reality of the oppression, or the sincerity of their lamentation. Like the widow who nagged at the unjust judge (Luke 18:1–8), like Jesus’ call to remove your tunic with your cloak and stand naked in view of your oppressor (Matthew 5:40), these Dalit people knew how to bring a God-view of oppression into the realm of the powers. This reminds me of the ancient tradition we find in the Bible of ripping clothes, refusing food, and covering oneself with dirt (Jonah 3:6). It is a dramatic outward sign of a corporate lamentation.

Not all acts of lamentation are so extreme.  These approaches often offer people who are hesitant about protest a way of expressing themselves without too much confrontation. At the theological college, The Queen’s Foundation, Birmingham, some students had protested at the Atomic Weapon’s Establishment (AWE), near Reading before.  But we had never gone before as a large group. We made it our aim to go to AWE as a whole coachload of people, most of whom had never been involved in anything remotely like this before.

The theme of lamentation resonated with many students already.  So after much discussion, we hit upon two very visual acts of lamentation: smearing of ash on our heads and fastening of red and white poppies onto the perimeter fence of the site. This would be accompanied by reading names of the dead, a sermon from Bishop Steven Cottrell, then Bishop of Reading and an address from someone who had visited Hiroshima.

The event was carefully planned and we did our research on the legality of our actions. This turned out to be vital as the police were deliberately misleading as to what we were legally allowed to do and we had to hold our ground, politely but firmly. In the end they did not interfere with our legal right to express ourselves and even gave the coach a police escort from one of the perimeter gates to the next because the driver wasn’t sure where to go! The event was extremely moving for all involved and for many it was an opportunity to reassess their views on our continued development of illegal and immoral nuclear weapons.

Lamentation can be transforming for those who choose to lament and those who attend as observers. It is also a spiritual activity and its intercessory role should be valued in its own right. When we lament we accuse God, we accuse ourselves, and those whose behavior creates fear or injustice. We ask the questions ‘Why?’ and ‘How long, O God?’ and our prayers tune us in to the will of God, hastening justice. Often lamentation leads to direct actions and story-rich lives that transform the lives of others and create a new national ethos that can lead to real political change. Public lamentation, like public mourning, offers a rich, diverse, and creative way to tap into the spirituality of anyone and everyone to bring about real justice.

Keith Hebden is an Anglican Priest and Deanery adviser on social and environmental Justice in Mansfield. His second book “Seeking Justice: The Radical Compassion of Jesus” is out 25 January 2013 with Circle Books.  Keith’s book has received great commendations from R&R friends such as Dave Andrews, Noel Moules and Ann Morisy.