A continual challenge in Christian community work and social action is the connection between the practical work being done to the actual message itself.

People can pour into church buildings for toddler groups, foodbanks, lunch clubs, youth clubs and night shelters. But often these social action programmes become detached and disconnected from the message which inspired the work in the first place.

How does this work connect to the church’s core message? How can the fruit of social action remain connected to the roots from which it has grown? These questions are important. If not addressed they create tensions which turn easily into strife and conflict between churches and the projects they have started. Its a reality I have seen many, many times.

There is often a tangible lack of confidence and ambition to make connections and to integrate the message alongside the action. Some people use woolly theology to justify this dis-integration, sometimes trotting out the line attributed to St Francis:

‘Preach the gospel at all times, use words if necessary’.

But as Justin Welby succinctly put it:

‘Francis almost certainly never said it. And if he did, he was wrong’.

I agree with Welby. Our failure to communicate what we believe is nothing to celebrate. The gospel is good news. It is a message about God’s grace and truth: what He has done and what He continues to do.

This message is best illustrated and clothed in action. But we need to be able to articulate the basis of the underlying hope behind our action. If we don’t the Christian message can morph into being one about how good and gracious we are. That’s a message sure to let people down.

So with this in mind, I was interested to read The Cross and Shame: Speaking of Atonement to a Shame-filled Society. It is written by Rebecca Winfrey, a former GP who has studied pastoral theology and now works for a church reaching out to disadvantaged families.

Winfrey grapples with the challenge of how best to communicate the gospel message into the context in which she is working. Her thesis is that society today struggles to feel guilt, but is very much aware of shame. Referring to the popularity of Brene Brown’s work on shame and vulnerability, she says:

‘I am defining shame in a particular way – as a sense that one’s whole self is of little worth. This is the not shame that comes about through doing something wrong. This is shame that says ‘There is something profoundly wrong with me.’

She then argues that the church places too much emphasis on guilt and little talk about the issue of shame:

‘When Jesus died for our sin, he died for both guilt and shame, but in the West we have often just focused on the guilt’.

This is one reason why the church’s message is failing to connect with how society thinks. Using a medical analogy, she says:

‘the disease of our culture appears to have become resistant to the treatment…as our culture has changed we in the church have carried on giving the same medicine…we need a different explanation of the cross that connects with the sense of wrongness that people carry.’

Winfrey is making a bold point: that the church needs to adapt how it articulates its core message about what Jesus’ death and resurrection achieved.

She strongly critiques the ‘substitutionary’ idea of atonement, with its court-room analogy which is so popular in Evangelical churches. But she also critiques more liberal interpretations which focus just on the moral influence of Christ and his self-sacrificial love.

She believes that the best explanation of atonement is the oldest: that Jesus’ death and resurrection achieved a decisive victory over evil. This victory came about through participation in the shame of the world: illegitimate birth, being a refugee, abuse, betrayal, torture and death. In doing so he stands in solidarity with us in our shame – and overcomes it.

‘God in Christ, far from being the distant God of the courtroom, is right down here with us, sharing our mess, understanding our shame’.

My two main areas of practical experience are homelessness and youth work and in both Winfrey’s thesis rings true.

Shame deeply affects many people affected by homelessness.  Often these feelings will be buried deep, meshed with trauma, addictions and regrets about failed relationships and lost opportunities. Often the material issues, such as food and shelter, are the easiest things to address. The deepest problems are those which has been internalised and where shame has corroded someone’s very identity.

In youth work, especially in the safety of summer camps, it is so common to see young people open up about their struggles with shame. Within a comparison-heavy culture where so much of what we do or how we look is rated and judged, it easily affects young people’s sense of who they are. So many voices tell them they are not good enough and that there is something intrinsically wrong with them.

The answer to this challenge is not an overly liberalised theology which ignores sin and reduces the gospel to feel-good fudge. Sin is real and corrosive, but we need to avoid clumsy or formulaic theology which intensifies shame and imprisons the gospel within middle-class morality.

In this brief booklet Winfrey covers a wide range of ground: discussing shame in childhood and adult experiences, before delving into the Bible’s perspective on shame and how we need to ‘adjust how we explain the gospel’ before sharing practical advice on putting this into practice. As she says

‘We need to speak of God’s unconditional acceptance before we talk to people of their sin. We need to talk of a new identity that God gives in exchange for our old, shame-filled identity before we talk about the challenge to our behaviour.’ 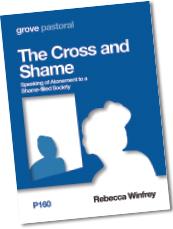 I would highly recommend this short booklet. At 27 pages can be read in one sitting and easily be used as the basis for discussion within a project team about how gospel truth can be integrated alongside compassionate practice.

It is an example of the most helpful theology: brief, accessible, reflective and mission-oriented. A book which helps us connect the truth of the gospel to practical action.

Buy: The Cross and Shame: Speaking of Atonement to a Shame-filled Society by Rebecca Winfrey (£3.95 (Grove Books, 2019)

5 thoughts on “‘The Cross and Shame: speaking of atonement to a shame-filled society’ by Rebecca Winfrey [review]”