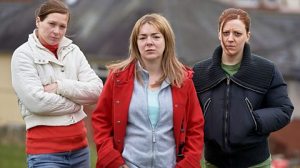 Everyone who cares about poverty and community life in the UK should make sure they watch the BBC drama The Moorside.

It is a thoroughly researched and brilliantly acted film about the tragic case of Shannon Matthews, a young girl from Dewsbury, West Yorkshire. In 2008, Shannon was reported as missing by her mum, Karen Matthews. Her disappearance triggered a massive search and the biggest Police operation in the region since the Yorkshire Ripper.

After more than 20 days, Shannon was eventually found at a relative’s house. But gradually the truth emerges: the abduction had been staged by the family in a crude plot to secure a reward.

There are many layers to the tragic tale: the comparison of media coverage with the disappearance of the more middle-class Madeline McCann, the arrest of Shannon’s Step-Dad for child pornography and how David Cameron used the case as an example of his narrative of ‘Broken Britain’.

The Moorside tells the story from the perspective of the local community and it captures both the positive and negative aspects of the estate culture with bravery and integrity. Julie Bushby (played by Sheridan Smith) passionately mobilises the community to search for Shannon and organises marches and vigils. There are many painful lines such as ‘We’ll show the world the kind of community we are’.

When Shannon is found and the truth emerges, the same people who supported the efforts to find her, turn in understandable rage and anger on Karen and the others involved.

In court, Julie gives evidence when Karen is charged with kidnap, false imprisonment and the perversion of justice. Sheridan Smith’s acting is remarkable and her words are extremely powerful:

“Karen Matthews is weak, cowardly and a liar. She put her child through a horrible experience, she let down her community and people who she said were her friends. And even when she eventually told the truth she went back to lying to save her own skin.

Thats what you all want me to say isn’t it?

And it’s the truth. But it’s a long way from the whole truth.

If you want to know the whole truth, you need to know that Karen is damaged. She has been used and abused since childhood, don’t ask me by whom but I am sure the list of people is a long one. Most are men who have used her for sex. Karen let them get away with it because she doesn’t understand that sex is not the same thing as love or affection, which is the thing she really wanted…

She has told lies and let people down but I will not join in with the lynch mob. Other people might want to use her as a human punch bag because it makes them feel better about their own lives and the shit they get up to but I won’t do it. I have stood by her before and I am standing by her now. She is still my friend.”

You will find it hard to find a more powerful expression of truth and grace.  And these words are made all the more authentic by knowing that Bushby continued to visit Karen Matthews in prison for the whole of her sentence.

Poverty of relationships and identity

The Moorside captures an extreme example of the multi-layered problems of poverty that many deprived communities face.  Material poverty is compounded and deepened by the poverty of relationships and identity.  These forms of poverty are entrenched by child abuse – a theme which runs through the film.

It is another reminder of the need to hold each of these forms of poverty together and resist the simplistic polarising that so easily happens.

The role of the church

The local church play a small but significant role in the story.  When the vicar arrives to help with the search, Julie Bushby tells her ‘We don’t need no Bible-bashers here’. But her willingness to serve and get involved means that she plays an important role. And it is to her that Bushby turns, despite her lack of faith, when the reality behind Shannon’s disappearance becomes clear.

And it is a fascinating postscript that, according to some reports, Karen Matthews has found faith in God.  According to The Daily Mail, she said: ‘When I left prison I picked up a Bible and saw a passage about “God loves you”. I knew I was hated by everyone, cut off from my family. But here they were, saying I was loved’.

Feel free to comment or share this article, but perhaps a fitting response would be to offer a prayer for all those involved in this tragedy. Especially Shannon who is now 18 and living under a new name with a new family.

The Moorside is available on BBC iPlayer until 9th March 2017

4 thoughts on “The Moorside: Shannon Matthews and the three faces of poverty”