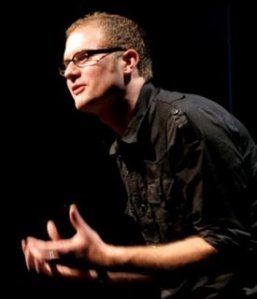 I have considered myself an atheist all my adult life.  But earlier this year I accepted an invitation to an event hosted by Greenbelt at Westminster Central Methodist Hall where the US pastor Rob Bell was speaking.

Before going to hear him, I researched a little bit on Google and Youtube. I found his style to be concise and his tone passionate and positive.  But also I was surprised to see the level of controversy that this man had caused and was further shocked to read that in some quarters he was considered a blasphemous heretic.

A heretic?  At Westminster Central Methodist Hall… I couldn’t wait!

What struck me about the massively negative response from some sections of the Christian community was the sense of polarity and factional politics that seemed to exist within the Church.  Rob Bell clearly represents what I see as an inclusive, caring and intellectual perspective which is in stark contrast to my image of much US evangelical Christianity, which can appear to be the shallow religion of a narcissistic, self-interested, rampantly capitalist society. Take these two contrasting quotes for instance:

“I don’t know that atheists should be considered as citizens, nor should they be considered patriots. This is one nation under God”  GEORGE W. BUSH

“Love frees us to embrace all of our history, the history in which all things are being made new.  Everybody is following somebody. Everybody has faith in something and somebody. We are all believers.” ROB BELL

The quote from Bush distances me from the Christian message and leaves me feeling like someone whose belief system is not only erroneous, but also totally incompatible with Christianity.  This is why I have tended to run a mile when the topic of Christianity or wider spirituality has been raised. On the other hand, the quote from Rob Bell is inclusive of all religions and atheists too – it takes me with him.  This is just one quote, but what compelled me to listen to this man was a tangible sense of his belief in the equity of humanity and the need to love.

I have been inspired to watch many of the NOOMA videos and listen to lots of Bell’s talks on-line.  In one of them Rob Bell poses a question that went something like “If Jesus Christ returned today, would he want to see use blithely worshipping him, or would he be more content to see us living as he did, incorporating his teachings and principles into our lives?”

This simple question spoke to me more than any other prior attempts to open my eyes and mind to Christianity.  Bell also said:

“Jesus is bigger than any one religion. He didn’t come to start a new religion, and he continually disrupted whatever conventions or systems or establishments that existed in his day. He will always transcend whatever cages and labels are created to contain and name him, especially the one called “Christianity”

I was overwhelmed by the honesty and clarity of the statement and curious to further explore the fuller context of the Christian message.

So what impact has listening to Rob Bell had?

I’ve had no ‘miraculous conversion’ but I am now open to all of the mysteries and unanswerable questions that accompany the stories and parables of the Old and New Testaments.  I initially ascribed this opening up process to the power and persuasion of Rob Bell and the sense of elation that accompanied hearing ‘his’ story.

What is increasingly apparent to me though of course is that Rob Bell is talking about Jesus – thus the story that speaks to me is the story of Christ.  Before this recent stage of my journey, I positioned my atheism from the perspective of someone who does not believe in organised religion.  But now I want to explore the ties that bind my ethical beliefs to the perspective of faith.  What I’m learning is that the Christian message chimes far more tunefully with my own than I had realised.

A spokesman for a generation?

From what I witnessed that night at Westminster Central Methodist Hall, Rob Bell appears to be emerging as the spokesperson for a generation.  Along with the content of the message, the aspect of the evening that thrilled me most was the demographic of the audience, which was largely young people, who have a progressive view of politics and religion.

We live in in an age of continuous scientific development and this continues to raises doubts about all forms of faith.   Rob Bell and like-minded Christians offer a potential conduit towards the restoration of credibility for Christianity.  Furthermore, from a self-interested perspective, although not ‘a believer’, I feel more involved and included and, most importantly, open and curious towards faith and the message of Jesus.