Many of the people I have spoken to in recent days, whether religious or not, acknowledge that there is something spiritual about the destructive chaos that we have seen unleashed.  The meaninglessness of the riots speak of problems with deeper roots than just material need: an underlying lostness in our culture around issues of identity and relationships.

This culture is brilliantly captured by Lily Allen in her song, The Fear:

I don’t know what’s right and what’s real anymore
I don’t know how I’m meant to feel anymore
When do you think it will all become clear?
‘Cuz I’m being taken over by The Fear

Allen’s song is more than just witty, ironic commentary about the state of our culture. It’s title The Fear shows an understanding of the end result of all this consumerism, self-interest and greed.  They offer satisfaction but actually result in a deep form of anxiety.  Our moral compasses no longer point towards the values that make us truly human: contentment, relationships, compassion and a commitment to others.  As a society, too many don’t know what’s right or what’s real anymore.

The relational nature of human beings means the more we concentrate simply on what we want and what feels right for us, the less happy we are.  This is why many of the people of all ages who have been rioting this week will see themselves as victims – because they have been deprived of committed relationships and a secure identity.  Too many have had too much of what they want and not nearly enough of what they need.

We are seeing an unveiling of the kind of poverty that is the real problem in urban Britain, a cocktail of material, relational and an inner poverty of identity (this 3-fold analysis is based on Jim Wallis’ thinking in Faith Works published by SPCK)  All of these are interconnected: 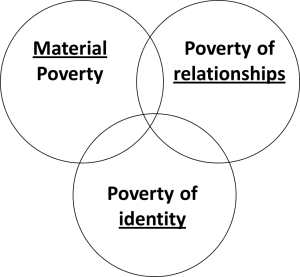 Material poverty and inequality is the cause of many problems – but its not the full story.

Interconnected is the growing poverty of relationships, where children born outside of any commitment, dysfunctional families and absent fathers are the norm.

Our fear of being judgmental has developed into a deep negligence of the importance of the family and a deeply immature approach to marriage.  Liberal acceptance has morphed into a libertarian denial of what is so obviously important.

Underlying both of these is a deep seated poverty of identity which is manifested in the epidemic of mental health problems, self harm and drug misuse.  Children need boundaries, structure and guidance – it gives them a confidence and security so that they can grow up with proper reference to the world around them.

These were the forms of poverty that I saw when I was manager of a hostel for young homeless people in Soho.  Everyday young people would come in deeply damaged by these forms of poverty.  We tried our best to treat the symptoms of these issues but dealing with the underlying causes is a far harder task.

And this is where without being able to talk about deeper spiritual lostness, both Right and Left wings of the political debate get into the kind of sterile arguments we have seen this week about whether to blame individuals or blame the government.  We need to recognise the deep roots of our problems as a society.  Values such as justice, commitment and the importance of family and of care for neighbours do not simply appear by themselves.  I believe these values grow best from an understanding of God’s love and grace.

Today, my family and I will be heading off to a field in Devon at Lee Abbey to help run a Christian Camp where over 200 teenagers will be coming.  For many people this might be the last place they want to be – especially after the events of this week.  But for us it is the highlight of the year – because in amongst the fun, the games, the silliness – the Christian message provides a focus and a deep meaning behind it all.  It’s a focus and a meaning that I hope that those who have been rioting can find – and in doing so have a stronger basis for a truly fulfilled life.

13 thoughts on “Taken over by The Fear: the spiritual roots of the riots”